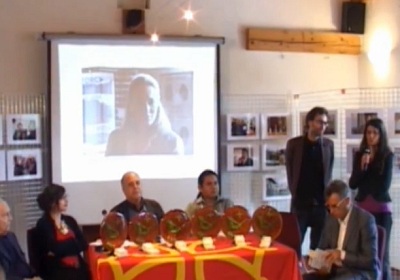 Last weekend a delegation of the Associazione Culturale Euskara (ACE) and the Department of Basque Language and Culture at the Upter Popular University in Rome attended the third edition of the Ostana Awards. This award, organized by the Chambra d’Oc, an Occitan cultural association, chooses a work every year in one of Europe’s minority languages. The ACE supported the presentation of 2011’s winning entry 'Filo d’erba' by Basque Harkaitz Cano. The author from Lasarte was one of the participants in the previous edition

Rome, Italy.  On Saturday June 2 the book Filo d’erba was presented in the Italian city of Ostana, translation of Belarraren ahoa by Harkaitz Cano.  The work was the winner of the Ostana award in 2011, where the Chambra d’Oc recognizes works in European minority languages.

The book, translated from Basque by Roberto Gozzi and Maria Teresa Atorin, was published by the Chambra d’Oc.  A delegation of the Associazione Culturale Euskara and the Department of Basque Language and Culture at the Upter Popular University in Rome attended the event, supporting this new step in the dissemination of the Basque literature in Europe and the collaboration between minority languages such as Euskera and Occitan.

The awards ceremony took place as part of a full program of activities including conferences and debates on the situation of literature in minority languages in Italy and across Europe.

Harkaitz Cano (Lasarte-Oria, 1975) won Euskadi’s literary prize in 2005 with Belarraren Ahoa.  The work, starts as a comic and ends as a poem.  The story assumes that Hitler died in Berlin in 1945 and after seizing all of Europe, crosses the Atlantic to take over Manhattan.  The novel presents two parallel story lines: one, that of a stowaway on the ship carrying the statue of Liberty from Paris to New York and the other that of Hitler on his way the American city with the intention of starting there his conquest of America.

Cano is one of the most prominent Basque writers, despite his youth.  In 2010 he participated in the Basque-Roman cultural week “EHRoma,” invited by the ACE and the Department of Basque Language and Culture at the Upter Popular University in Rome.