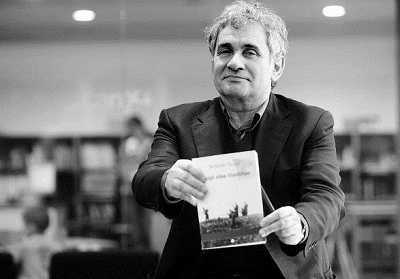 Bernardo Atxaga’s novel Seven houses in France, has been selected as one of the five finalists in the “Shadow” Independent Foreign Fiction Prize, the parallel section of this major British Literary Award. The “Shadow” is awarded by a jury formed by a collection of blogs specializing in foreign fiction. Along with Atxaga are authors like Amos Oz, Sjon, Peter Nadas, Umberto Eco and Matthias Politycki. The jury will announce the winning work on May 14, just prior to the official announcement of the winner of the Independent Foreign Fiction Prize.

Donostia-San Sebastian.  The work, Zazpi etxe Frantzian by Bernardo Atxaga has been named one of five finalists in the “Shadow” Independent Foreign Fiction Prize.  The novel’s English translation, Seven Houses in France, was included in the shortlist drawn up by the shadow jury.  This parallel prize accompanies the prize awarded by the official jury.  This jury has also published its list of six finalists, in which the Basque author does not appear.

The six finalists selected by the “shadow jury” were: Bernardo Atxaga, Amos Oz, Sjon, Peter Nadas, Umberto Eco and Matthias Politycki.  This jury is comprised of representatives of seven blogs specializing in literature.

The name of the winning novel, in the official category as well as in the shadow category, will be announced on May 14.  For more information on the official prize, here.