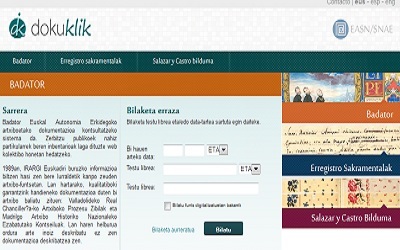 The Basque Government’s Department of Culture presented Dokuklik yesterday, a database of historical documents that includes both public and private archives from the Basque Country. The website contains six million references from the 13th to the 20th centuries and two and a half million associated digital images, which will reach three million in June. Additionally, a music archive is underway and audiovisual resources are under design according to the Vice-minister of Culture Antonio Rivera during the presentation.

Vitoria-Gasteiz.  This initiative was made possible by the cooperation of 150 Basque public institutions, foundations, families and individuals who contributed nearly 500 archives.  In exchange for allowing access in a single portal of all of these documents participating individuals and groups were all provided a digital copy of their documentary heritage.  The website incorporates all of the historical documents kept by the Department of Culture at its headquarters of the Archive Service (Irargi), which represents about 30% of the digital images available on Dokuklik.

The Department of Culture dedicated nearly 1,200,000 Euros between 2007 and 2011 to this project which makes the Basque Country the only European region with a website that links archives provided by institutions, families and individuals that can all be seen on one site.

“We have seen many magnificent samples of medieval documents from all over the Basque Country, but have also organized document images of anonymous men and women from the most remote corners of our country, many of them manuscripts with apparently irrelevant content, but documents full of life and news of first importance,” emphasized Rivera.

The technical architecture of the Project was carried out by Irargi, who, since 1998, has a website with 115,000 documentary references and whose search engine, Badator, was the pioneer in this area.  The success of Badator guarantees Irargi’s experience in this field with 100,000 users in 2011.  It is worth noting that the site has been visited by people from 99 countries – besides the Basque Country itself, mostly from Spain and Latin America and mainly for genealogical research (60%).