After the success of the genealogy workshops in Boise and Homedale, the HEAB would like to extend the opportunity to other clubs 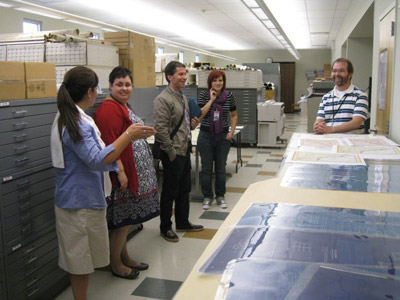 Two representatives of the Historic Ecclesiastic Archive of Bizkaia (HEAB) participated in two genealogy workshops in Homedale and Boise, Idaho on October 13th and 15th respectively. During the workshops the two technicians taught the groups how to look for information and certificates of origin on the archive’s database. “During the workshops we heard ‘oh! and ah!’ each time someone would find something new,” Cristina Castillo told EuskalKultura.com. Now the archive is ready to extend these workshops to other Basque clubs so that the Basques in the diaspora can take advantage of all the possibilities that the database offers.

Derio, Bizkaia.  In mid October two technicians from the (HEAB) traveled to Idaho invited by the board of directors of the Cenarrusa Foundation for Basque Culture.  The goal of the trip was to let people know about the possibilities that the archive’s database holds for the many Basques in Idaho who are originally from Bizkaia.

The HEAB has digitized the great majority of the ecclesiastical archives of Bizkaia which now allows for genealogical searches and the possibility to obtain electronic files via their website.  The problem is that many Basques in the Diaspora don’t take advantage of the archive and more often they don’t even know about it, or they don’t know how to use it.  The workshops seek to put an end to these problems.

In Homedale and Boise

Cristina Castillo Perez (HEAB) and Asier Romero Andonegi (College of Education of the University of the Basque Country) were the two in charge of teaching the workshops.  The first took place at the Txoko Ona Basque club in Homedale.  “We explained the vastness of the database and how important it is to Bizkaian genealogical research showing participants how to request documentation through the web page, explaining some of the peculiarities of doing Basque genealogical research, and Paleography, the study of ancient writings,” she explained.

The next workshop took place at Koelsch Elementary School in Boise that lasted for two days for thirty people all of whom were personally interested with the research as they all had ancestors from Bizkaia.  “We were surprised by how expressive these people were, all of the sudden we’d hear ‘oh’, ‘ah’, each time someone would find some information,” Castillo said.  “There were many surprises, for example, one woman who came with her Basque husband found out that Ezkerra was her fifth or sixth last name.”

The workshops are practical in character, conducting searches in person and reproducing documentation from the HEAB.  “One of the problems faced is in the changes in the spelling of the surnames either by the name being Americanized, or by evolution to Basque spellings of the names,” Cristina explained.  “In these cases, for example, we teach them how to use truncators to replace the problematic characters.”

These and other practical problems are what keep many Basques in the diaspora from finding what they are looking for in the database, and so the center is hoping to conduct more workshops in other Basque communities.

The trip also included a visit to Boise’s Ikastola conducted by its director, Mara Hardesty, and to the Basque Museum along with Patty Miller, director.  Finally Castillo and Romero were invited to a Euzkaldunak Basque club dinner where more than 300 people attended and where they also did a presentation of the database and the HEAB’s website.