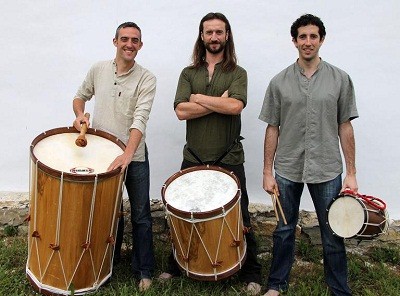 The three members of Kalakan

They have not admitted it themselves, but the news that Kalakan will be part of Madonna’s upcoming tour has circulated on the internet and in the Basque press for a few days. The news was let out on one of the singer’s fan sites, and since then various Basque media, including EuskalKultura.com, have tried to confirm the news without success. Apparently the group has signed a confidentially agreement with the singer and neither they nor their label, nor their entourage can provide any information on the subject. It will have to wait until May 29 when Madonna begins her world tour in Tel Aviv. Will Kalakan be with her?

Donostia-San Sebastian.  The news has yet to be confirmed but apparently members of the group Kalakan are currently in the US where they may be rehearsing for Madonna’s upcoming tour.  As reported by various media, the group will play a version of “Open Your Heart,” from her eighties album, True Blue and will mix it with their song “Sagarra jo.”

Kalakan is comprised of Thierry Biscary, Xan Errotabehere and Jamixel Bereau and its roots are in traditional Basque music – the poem by Josean Artze “I drink new water from the old fountain, the water is always new from the old fountain” heads the group’s website – but the result is something completely modern and very powerful.  The percussion and power of their voices are the defining elements of their music that makes such an impact. [Kalakan at the Fifth World Congress of Basque Collectivities in Donostia, performing for delegates of Basque clubs from all over the world]

On vacation in Getaria

Currently, the group has only produced one álbum (Kalakan, 2010), in which also appear the Anaiki choir from Paris and the pianist sisters Katia and Marielle Labeque, who introduced the group to Madonna.  Last year Madonna spent a few days in Getaria (Guethary) and the Labeque sisters invited the group to play at a birthday party that the singer also attended.  Madonna was dazzled by what she heard.  Now the group will take Basque music around the world with its “Sagarra jo,” remixed with “Open Your Heart.”