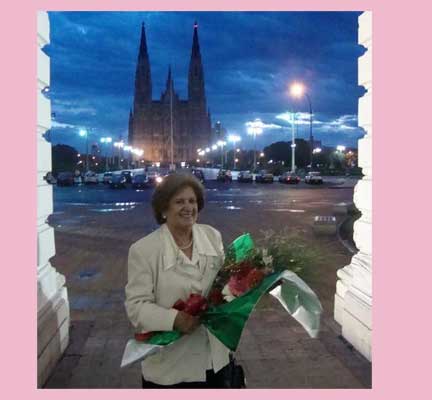 A photo exhibit that was Inaugurated on March 12th, International Women’s Day, at the Euzko Etxea of La Plata entitled, “Women of yesterday and today: They are part of our history,” remains open. In addition to the opening of the exhibit, La Plata chronicled another important activity: organized by the Directorate of Organizations and Municipal Communities, entitled, "Designation of Outstanding Women of the Communities,” which was awarded to a member of Euzko Etxea, Rosa Maria Ibarguren of Macuso.

La Plata, Argentina.  The photo exhibit “Women of yesterday and today: They are part of our history,” was conceived as a tribute by the Basque club, to the women who have come through the institution leaving behind their important contributions.  Open since March 12th at the clubhouse in the Dining room and Members’ room, the photos can be viewed for a few more days free of charge.

As the organizer, María Fernanda Astigarraga, explained to EuskalKultura.com, “the exhibit brings together photos that tell about the various activities that took place in the club, sociocultural (Euskera, Free Lectures, the library, choir, dancing groups, Commission of Women), sports (baseball, hockey) and others such as communication, familiar sounds, cleaning or performing, among others. "

“Images were selected from the institutional and historical archives. In addition we provided the public a catalog and a book of suggestions and comments, as alternatives that allowed interaction with those who reviewed the photos and wished to express their opinion, to fill in information, and to improve future presentations," according to Astigarraga, the person in charge of Euzko Etxea’s Matxin Burdin Library." [The photo exhibit “Women of yesterday and today: They are part of our history,” is open to the public at the clubhouse (photo EE)]

Astigarraga added, “We hope that after this edition, this becomes a tradition and takes place periodically, in order to exhibit newer photos that include all of the women who have passed through the club, helping to forge its history.”

Feature Women of the Communities

In recognition of International Women’s Day, the Directorate of Organizations and Municipal Communities of La Plata invited various institutions to nominate women who have made significant contributions to their communities.  On behalf of the Basque community the Basque club nominated Maria Rosa Ibarguren de Macuso as its outstanding woman.

“Rosita, as she is known to all, is a person who has been part of the club since its early years, and active member, who is actually serving on the board of directors as account reviewer, who has actively participated on the Commission of Women and Dance Groups, is a huge collaborator in the effort of collecting memorabilia, who has been present along with her family during different times and institutional activities, and if this weren’t enough, due to her commitment to all that is Basque, the club named her as the Mayor of the club for 2011-12,” the club explained.

The award ceremony was held on Monday, March 12 and each of the distinguished women received a diploma from the Director of Organizations and Communities, Mauricio Castro and mayor of the city, Pablo Bruera.