The documentary Emak Bakia, about the search for a mysterious palace in Lapurdi is presented in Mexico 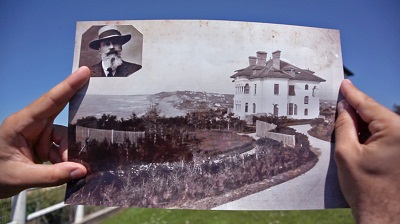 A few years ago the Navarrese director Oskar Alegria discovered an exhibition at London’s Tate Gallery by photographer Man Ray surprisingly entitled, “Emak Bakia,” which means “leave me alone.” It was a film by Ray in 1926 in a house on the Lapurdi coast. Alegria intuited that there was a story to be told behind this title and launched the search for this house. The film reflects that search and discovery of the house, and the treasures found along the way: incredible stories and personalities from another time, such as the 94 year-old German princess, the granddaughter of a Romanian nobleman who built it, who was looking for Emak Bakia at the same time as Alegria. The documentary is being presented today and Sunday in Mexico. It was presented before in Argentina and will eventually participate in the International Edinburgh Film Festival in Scotland.

Mexico City, Mexico.  Director Oskar Alegria will present his documentary this afternoon Emak Bakia at the French Institute of Latin America.  The film comes from Buenos Aires where it participated in the 2012 BAFICI Festival and captivated the public, especially those who are descendants of Basque who attended the screenings according to Alegria.  The film portrays the search of a house on the coast of Lapurdi, a search similar to that experienced by many Basques in the Diaspora.

The starting point of the documentary is the experimental film done in 1926 by famous photographer Man Ray simply titled, Emak Bakia a Basque expression meaning “leave me alone” which aroused the curiosity of Oskar Alegria.  The images only increased the mystery: “The film is shot on a single plane  showing the landscape and it appeared to me to be our country: isolated farmhouses, white walls… But it was done in the 20s so who know where the images were taken,” Alegria recalls.

Following the thread, Alegria found out that Man Ray spent time in Biarritz in a house called Emak bakia.  The Navarrese director decided to find the house and show that search in the documentary.

“The search for the house may be the axis, if there is one, who knows,  and to find this house you have to get out and search on foot…,” Alegria said to EuskalKultura.com, explaining  with humor that the film is more of a foot movie than a classic road movie.  “I think that only at a leisurely pace, not by car or even by bike, only by walking, can we encounter all of the treasures and unexpected surprised that the road gives us.”

And Alegria found many treasures along the way, and viewers along with him, as the documentary progresses. Alegria takes an imaged from Man Ray’s film and covers the Lapurdi coast searching for the house.  “Above all I kept an image in my head, a frame in which you can see the sea and a desert place, without houses.”

In the end, while Alegria is dedicated to look obsessively at the sea a friend accompanying him finds the house, looking inward.  “He found it thanks to the window with columns,” Alegria explains.  “There are many strange columns because the house was built by a nobleman from Romania.  At that time Biarritz was full of aristocrats and this nobleman built a replica of his palace in Romania.  When we found it, I felt like that was the beginning of a long road.” On this long road Alegria came across many surprises, among them was the German princess, like he, who was looking for the house. She was the granddaughter of the Romanian nobleman and her name is Maria Despina zu Sayn-Wittgenstein.  “She is a woman of great style, at her 94 years, a personality from another time.  Cousin of writer Vladimir Nabokov, she was a tennis table champion in Romania in her youth, as well as being a biologist.  She did research on the olfactory system of ants.  Increíble.” Alegria summarized.

Nevertheless, these kinds of personalities are frequent on the Basque coast, says the director: “The Lapurdi coast is our Amurda, it has something special, namely, perhaps a special wind, like the tramontana.  The coast is always full of lunatics, and I say lunatics in the best sense of the word.  Yes, each house holds many stories, from the palace of Abbadia to the castle of Ibarritz where many curious characters have lived by this sea.” [Maria Despina zu Sayn-Wittgenstein overlooking the sea from the house Emak Bakia, in an image from the documentary]

The house Emak Bakia is an example of that, he assures: “A Romanian nobleman who found his Paradise on a hill in Bidart.  He wanted to be outside of Biarritz, apart from the aristocratic ambience.  Escaping from here he built a palace on an isolated hillside with materials from Romania.  He named the house himself calling it Emak Bakia, to vindicate his peace and freedom.”

The house now belongs to a French aeronautic company whose employees use it for recreation and a vacation spot.  “The palace has been occupied by workers, here is another story,” Oskar adds.

Alegria just presented the film in Buenos Aires and was surprised by the large number of Basques who attended the screenings.  “Many were very moved by the film.  Many have never stepped foot in the Basque Country but they know it by heart through stories and anecdotes,” he says.

After seeing it many shared their thoughts with him:  “For example, a Zuloaga came to me in tears to tell me that he always dreamed  about the house of his ancestors and that, after seeing the film, he had in some way found that house and made his dream reality…” he recalled.  “Another young Argentinean of Basque roots, journalist and writer, came to the three screenings.  “You must know it by heart” I told him and he said “I came to get excited again.”  His last name was Jauregui (which means palace in Basque)… “What a coincidence,” he said.

In Mexico City and Edinburgh

Alegria has expressly invited the Basque community of Mexico to the screening that he will hodltoday at 21:00, at the French Institute of Latin America, and on Sunday at the Tlatelolco Cultural Center at 19:00.  From Mexico the film will jump to Scotland where it will complete in the Official Selection of the Edinburgh International Film Festival.  In September it will be presented in the Basque country at Donostia’s International Film Festival and in October it will return to Mexico to the Film Festival of Morelia.