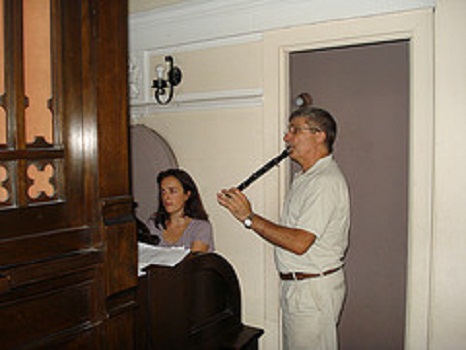 The annual concert cycle of the Euskal Echea Association of Buenos Aires started last April. Recitals take place once a month on the second Friday at 7pm in the chapel at their headquarters on Sarandi Street 735 in Buenos Aires. June’s concert will take place today, the 8, and will include the performance of a friend of the cycle, organist Ana Paula Segurola, and singer Mercedes García Blesa. At this concert they will perform a Zortziko that was found in a manuscript that is actually housed in the treasures of the National Library of the Argentinean Republic. Admission is free and open to the public.

Buenos Aires, Argentina.  The goal of the Euskal Echea Association’s concert cycle is to spread the classical music, especially those works by Basque musicians or Basque descendants.  To this end, the program integrates artists who are connected in some way with the Basque community and works related to the people of the Pyrenees.  A good example of this was the performance by the group “Los Ministriles” in April’s concert, performing a piece by the Cancionero de Palacio called Jançu Janto that was very unique in that it mixed Basque and Spanish.

In the same way, today’s concert will also offer a rare piece.  Specifically this evening’s repertoire includes a “zortziko” that was found in the manuscript Spanisches Volkslieder that is preserved in the treasurer’s of the National Library of the Argentinean Republic and which will be the subject of an exhaustive interpretation in the cycle “Rare scores” of that institution on June 23 and 24.

With regard to the musicians performing today’s concert, it is worth noting the presence of organist Ana Paula Segurola and singer Mercedes Garcia Blesa, who is replacing soprano Laura Delogu who cannot perform due to personal reasons.

Finally, remember that this and all concerts in the cycle are free and open to the public, and that they take place at the headquarters of the Euskal Echea school, Sarandi 735 at 7:00pm.

The concert program continues in the following way:

-August 10:  the choir “Lagun Onak,” directed by Miguel Pesce, along with José María Gutierrez on the txistu and Jose Luis Bella on the organ