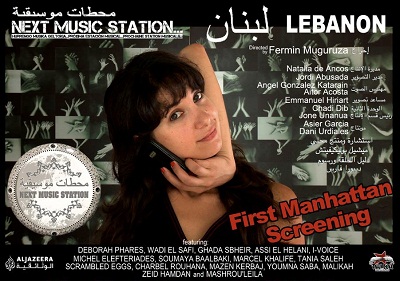 Barcelona’s Euskal Etxea once again will showcase Basque cinema in the Catalan capital with the Zinemaldia 2012 festival. This exhibition will present some of the most recent work in Basque film, beginning tomorrow and running until the end of the month. Documentaries, animation, drama, comedy…the program will cover all kinds and genres of fil m that will be screened in their original versions with subtitles. The films’ directors and actors will present the movies in person and will visit with the public at the Euskal Etxea. On March 8th Fermin Muguruza will present his documentary Next Music Station: Lebanon.

Barcelona, Catalonia.  From March 1-30th Barcelona’s Euskal Etxea will be the host of Zinemaldia 2012, the Basque film festival that presents some of the Basque Country’s latest works by filmmakers, actors and archivists.

According to the Euskal Etxea, this seventh edition of the festival represents a consolidated event within the larger cultural project in Barcelona.  The difference is that Zinemaldia provides an opportunity to the Catalan public, as well as to the Basque community there, to see quality films that are not usually available in commercial film circuits.  It is also worth noting that all screenings are free and open to the public which is much appreciated in these times of crisis.

Finally, and as every year, the festival will attempt to create a dialogue between the filmmakers and the audience through presentations and symposia.  This year Zinemaldia has managed to have the director or one of the actors in attendance to present each film and answer audience questions.  During the month of March the Basque club will then be visited by the likes of Telmo Esnal ("Urte berri on, Amona!"), Alberto Gorritiberea ("Arriya") and Asier Altuna ("Bertsolari"), Catalan actress Montserrat Carulla and musician Fermin Muguruza, director of the documentary series "Next Music Station,”  who will present the chapter "Lebanon."

-For more information about Zinemaldia 2012 on the Euskal Etxea blog, here