Starting on Monday in Caracas, the fourth edition of Zinevasco, will provide a window into Basque film 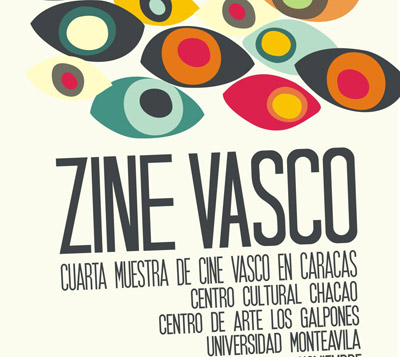 Zinevasco's fourth edition poster that begins on Monday in Caracas

The latest edition of Zinevasco will begin on Monday November 7th, offering the Venezuelan capital a large selection of films made in the Basque Country. This is the fourth edition of the show that will present five feature films and fifty shorts. Sessions will take place until November 21st at the Cultural Center of Cachao and at the Art Center, Los Galpones, with a new special section at the University of Monteavila. All sessions are free of charge.

Caracas, Venezuela.  The film festival Zinevasco returns to Caracas, an exhibition dedicated to Basque film production, this year celebrating its fourth edition.  Zinevasco relies on cooperation from other entities such as Kimuak, the outreach program for short films of the Basque Government, and several Basque producers and professionals in the sector, along with the Venezuelan cultural centers of Cachao and Los Galpones, where the screenings take place.

In addition this year the program includes a special section at the University of Monteavila whose aim is, “that the students in Social Communication, and anyone else who would like to participate, will be able to consider a variety of scripts, sets, and sequences that can help them in their career development,” explains Vincente Corostola, festival coordinator.  All screenings are free to the public.

This tide of cinema will begin next Monday the 7th of November with the first screening at Cachao’s Cultural Center.  The sessions will begin at 19:00, for four days until November 10th.  For its part the Los Galpones Art Center will be the site of a special screening on the 8th, also at 19:00, that is free to the public.  Finally, the sessions at the University of Montevila will take place on the 7th and the 2ast of November.

In the short film section there will be 42 works to be appreciated, many of those are part of Kimuak’s 2010 catalogue, and others come directly from their own directors, producers, and distributors.  The successful animated short Daisy Cutter – “is going for an Oscar,” according to the organization – or the humorous mockumentary Los 4 McNifikos (The Four MacNificent Ones), selected at New York’s International Latin Film Festival are just two examples of what Zinevasco has to offer.  As far as feature films, five works will be shown, among them Izarren Argia (The Stars’ Light), based on the true story of events at the jail-convent of Saturraran or La Buena nueva (The Good News) by Helena Taberna from Altsasu.