The record label, Esan Ozenki’s catalog can now be heard free of charge on Spotify; Muguruza at film festivals in Donostia and Mexico City 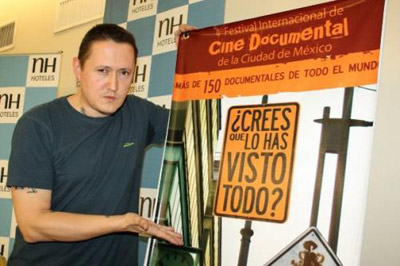 The historic label Esan Ozenki published, among others, albums by Negu Gorriak and now, ten years after its disappearance, its leaders have decided to distribute its catalog online. This month folks will be able to listen to it for free on Spotify. Even though it had been dissolved for years, Negu Gorriak still has a lot of pull among Basques in the Diaspora, especially those in Mexico. That is exactly where its singer, Fermin Muguruza, will be at the end of the month. The singer will participate in the Documentary Festival DOCS DF and present his series “Next Music Station,” a sound map of the Arab world made by the channel Al Jazeera. He will do the same this week at Donostia’s Zinemaldia.

Donostia-San Sebastian.  Esan Ozenki was created in 1991 and the record Gure Jarrera, Negu Gorriak’s second work, was its first release.  Since then, and during the ten years of its career, the legendary Basque label has released numerous albums by both Basque and international groups.  Now, the majority of its catalog, with the exception of some groups, will be digitally distributed on the internet.

According to an interview given by the heads of Esan Ozenki to Berria, at first all the songs will be able to be heard for free on the music site Spotify.  After that, they will expand to 23 other music sites.  During this time, and in order to promote the launch, Spotify has created a game where four experts have created their own playlists, based on the catalog.  Those experts are musician Fermin Muguruza and the music journalists Jon Eskisabel, Roberto Herreros and Xavier Cervantes.

Muguruza in Donostia and then in Mexico

While Negu Gorriak’s music is being distributed on the internet, Fermin Muguruza will plunge himself into the world of cinema.  During the last few years the man from Irun has fused, very successfully, two of his great passions, documentary and music.  Proof of this is the series “Next Music Station,” a sound map of the musical reality of the Arab world, which was done thanks to a request to Al Jazeera.  Three chapters of the series will be shown over the next three days; the first dedicated to Lebanon will be shown at Donosti’s International Film Festival.  Show times, here.

From Donostia, Muguruza will travel, at the end of the month to Mexico, where he’ll participate at the Documentary Film Festival DOCS DF.  Muguruza is chairing a session of the festival entitled,” It sounds like my world.”  Furthermore there will be a special session this year dedicated to “Next Music Station.”