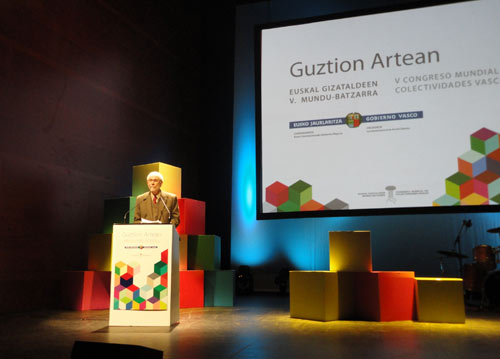 Lehendakari Patxi Lopez presided at the inauguration ceremony of the 5th World Congress of Basque Collectivities yesterday at the Kursaal in Donostia. The Congress will run through Friday in the Gipuzkoan capital. Representatives of Basque clubs and federations from 24 countries throughout Europe, America, Asia and Australia were convened this year under the motto “Guztion artean” (Together). Sessions began early in the morning, with the presentations of delegations from various countries. Today’s program will be the Euskal Herria Mugaz Gaindi (EHMG) seminar.

Donostia-San Sebastian.  Yesterday the 5th World Congress of Basque Collectivities began with a ceremony presided by Lehendakari Patxi Lopez at the Kursaal in Donostia.  Previous editions have taken place in Vitoria-Gasteiz, and Bilbao and so this year’s edition rounds out the tour of the capitals of the Basque Autonomous Community.

The opening day included a speech by Lehendakari Patxi Lopez who stated that the Basque Country cannot be understood without its Diaspora and that the Basques from abroad are “our history and our link” that spread and move the Basque image throughout the world as well as its “best ambassadors.”  Lopez welcomed Euskadi’s new situation “without the heavy burden” of ETA, which had determined and pursued the image of Euskadi in the world adding now that the image of Euskadi was no longer linked to violence, but instead “to quality, competitiveness and innovation.”

The ceremony honored and awarded diplomas to representatives of the oldest Euskal Etxeas, a list headed by the Centro Laurak Bat in Buenos Aires who is 134 years old, accompanied other centers including those who will celebrate their centennials in the next five years.

American anthropologist William A. Douglass then took the stage to deliver the keynote address, something that he has done at three other World Congresses.  In his own words, Douglass, reviewed the observations and recommendations that he had made in his speeches at previous Congress editions, presenting a positive view of the road traveled by the Basque Collectivities Abroad since the first World Congress held in Vitoria-Gasteiz in 1995.  The ceremony ended with a musical performance of “Ameriketara joan nintzan” (I went to America), with recorded messages from various parts of the Diaspora projected on the screen.

Yesterday afternoon, just before the inauguration ceremony, Mr. Basque, William Douglass’s biography by Mielanjel Elustondo was presented.  This took place during the panel moderated by Guillermo Echenique, Secretary General of Foreign Action of the Basque Government, which also included Gregorio Monreal, Alfonso Perez-Agote and Joseba Zulaika, along with Bill Douglass, and author, Mielanjel Elustondo.  The book is in Spanish and was published by Pamiela

The Congress sessions began at 9am in three rooms at the Kursaal adapted for the purpose, with presentations by various offices and departments of the Basque Government involved with the Diaspora such as: the Directorate for Basque Citizens and Communities and the General Secretariat of Foreign Action; the Department of Culture, particularly the Etxepare Basque Institute and HABE.  Lourdes Auzmendi, the Deputy Minister of Culture represented her department while Director Aizpea Goenaga, and the Director for the Promotion of Euskara, Mari Jose Olaziregi represented the Etxepare Basque Institute, while HABE was represented by José Francisco “Kinku” Zinkunegi.

A photo chronicle of the day is forthcoming.