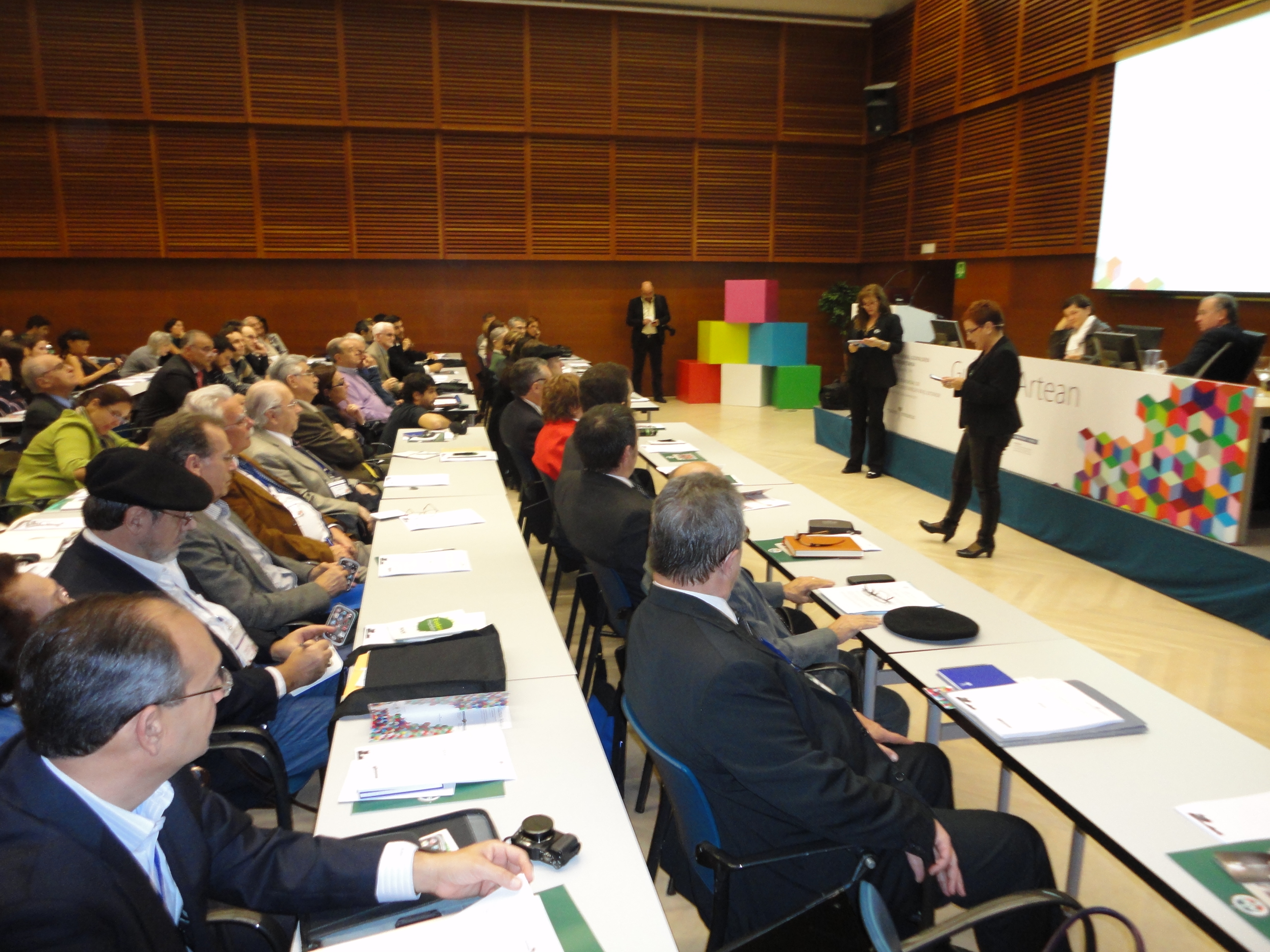 EuskalKultura.com brings together its participation and tracking of the events taking place during the 5th World Congress of Basque Collectivities from its stand in situ along with reflections provided on Facebook, Twitter, and on this website. Following is a photo chronicle of the events including the first day where presentations took place by various Basque clubs, federations as well as Basque Government institutions such as HABE and the Etxepare Basque Institute outlining their current situations and future projects. The official inauguration took place on Wednesday afternoon with William Douglass delivering the keynote speech, and recognition of the oldest Basque centers in the Diaspora.

Donostia-San Sebastian.  The 5th World Congress of Basque Collectivities began on Wednesday November 2nd by welcoming the Basque club representatives as well as the participants of Gaztemundu to the event that takes place every four years bringing Basques in the Diaspora together.  Subsequently presentations by various Basque Government entities that are involved with the Diaspora took place such as the Etxepare Basque Institute and HABE, as well as reports from various Basque federations (FEVA, NABO, FIVU, Venezuela and Spain), as well as several Basque clubs and national representatives.

[First Congress session. After greetings and words of welcome by the Secretary General for External Affairs, the word was passed to institutional representatives of the Department of Culture of the Basque Government. At the table, from left to right, Aizpea Goenaga, director of the Etxepare Basque Institute, Lourdes Auzmendi, Deputy Minister of Culture, Guillermo Echenique, Secretary General of External Action and Julian Celaya, director of the department of Basque Citizens and Communities Abroad (photo EuskalKultura.com)] [The different Basque Government entities that are closely involved with the Diaspora along with the Directorate for Basque Citizens and Communities Abroad presented their accomplishments and plans.  Here, Aizpea Goenaga Etxepare’s director and Mari Jose Olaziregi, director of the promotion and diffusion of Euskara respectively during their tri-lingual presentation in Basque, Spanish and English.  At the table Lourdes Auzmendi, Deputy Minister of Culture (photo EuskalKultura.com)]

[NABO’s presentation.  Izaskun Kortazar, Euskara coordinator, in charge of facilitating teaching and learning of the Basque language for the North American Federation, presented progress made and plans for more teacher training, barnetegis and new classes in the US and Canada (photo EuskalKultura.com)] [More presentations by other federations and Basque club representatives.  In the photo, FEVA’s president Ricardo Mario Basterra.  FEVA is the largest of the federations and is comprised of more than 100 Basque clubs, 78 of those recognized by the Basque Government.  Seated at the table, Guillermo Echenique, Secretary General of Foreign Action, along with Julian Celaya, director of the department of Basque Citizens and Communities Abroad; accompanied by Basque Government delegates in Latin America: Iñaki Martinez (Colombia, Venezuela and Central America), Ana Urchueguía (Chile and Peru) and Elvira Cortajarena (Argentina, Brazil, Paraguay and Uruguay) (photo EuskalKultura.com)]

[Representing Germany, the new Euskal Etxea in Berlin recognized and incorporated a little more than a year ago, even though the Gernika Association has been active since the 1990s.  Ainhoa Añorga, originally from Donostia, club president during her presentation (photo EuskalKultura.com)]

[Representing the Basque club of Bogota was its vice president Jose Vicente Katarain who talked about  his club’s projects aimed at making people more aware of the Basques in the Colombian capital as well as increasing their presence there (photo EuskalKultura.com)]

[Adelaide Daraspe, originally from Urruña and president of the Basque Association Euskaldunak of Quebec, also spoke on behalf of her club that recently celebrated its 15th anniversary (photo EuskalKultura.com)] [Presentations by various Basque clubs explaining their approaches, realities and solutions to the everyday problems faced.  Aitor Arruti, Barcelona’s Euskal Etxea representative, seen here, addressed the audience in Basque as many others had, taking advantage of the simultaneous translation service provided. (photo EuskalKultura.com)]

[Raul Noblecilla, vice-president of Lima’s Euskal Etxea also presented, boasting that Lima’s center was the cradle of Basque associations around the world.  He also announced the unfortunate news of the death of the center’s president, Victor Ortuzar, after which a moment of remembrance was observed (photo EuskalKultura.com)]