'Omendu Basques: Beyond the Bombs,' a film by Anna Bruning will be released next Saturday in Durham, NH 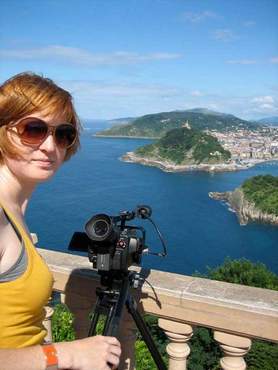 Anna Bruning in Donostia-San Sebastian. She will unveil her film “Omendu Basques: Beyond the Bombs” Saturday, Feb. 28 at the University of New Hampshire (photo courtesy of UNH Media Relations)

Durham, New Hampshire, USA. Don’t be surprised if one day you see Anna Bruning at the Cannes Film Festival. The University of New Hampshire senior debuts her first documentary film this weekend, a project that took her to Spain to film and had her rubbing elbows with some of the most accomplished editors and writers in the business at Ken Burns’ Walpole studio.

Bruning, a communication major who also is studying Spanish and cinema studies, unveils her film “Omendu Basques: Beyond the Bombs” Saturday, Feb. 28. The gala, sponsored by UNH’s International Research Opportunities Program (IROP), begins at 6:30 p.m. in the Memorial Union Building, Theatre II. It is free and open to the public, and will include a question-and-answer session following the film.

Bruning’s film is about the Basque people, who live in northern Spain and southwestern France. She tells the story of a people whose rich culture and history have been overshadowed by the Euskadi Ta Askatasuna or ETA, a terroristic organization that has been advocating Basque independence since the 1950s.

“This film is about the people who aren’t involved in terrorism. It’s about their culture, with the primary focus on their language because it is one of the most significant parts of their culture. It is now how they identify themselves. In the past, Basque identity was tied to hereditary traits, but today, identity is much more about the will to be Basque,” Bruning says.

“The Basques were the first to circumnavigate the world. They were the first commercial whalers. It was a Basque crew who helped Columbus sail to America, and they were here fishing for cod before Columbus arrived. Their language – Euskera – is particularly unique, with it and their culture surviving through invasions and Romanization. We have all of these facts, yet if people have even heard about the Basques, it’s usually been about the ETA,” she says.

Bruning first learned about the Basque people during a trip to Spain with her family as a teenager and became interested in documentary filmmaking in high school. After she arrived at UNH, she was encouraged to apply for an internship with noted documentary filmmaker Ken Burns’ Florentine Films. She spent the summer between her sophomore and junior years in the Walpole studio.

“That internship was one of the best summers I ever had. I was so excited to go to work every day. The executive editor went through a number of films with me, explaining – shot by shot – how the editing decisions were made. I also met Ken Burns, who talked to me about his inspiration. The internship really gave me a good background to go into this documentary. I don’t think I would have had enough experience to do it if I hadn’t interned with Ken Burns, and I don’t think IROP would have given me the grant to do the documentary if I hadn’t had the internship,” Bruning says.

After receiving an IROP grant for her documentary film project from the UNH Hamel Center for Undergraduate Research, Bruning spent the summer between her junior and senior years in Spain interviewing Basques and filming. She talked to students, citizens, Basque government officials and organizational leaders who were eager to tell her about the significance of their culture and what it means to be Basque.

“I met a man who, after an hour interviewing with me, told me I should contact his brother. His brother and wife a took day off from work to show me around town, interview with me, and make dinner for me. It demonstrates how proud these people are of their culture and how much they want to share it with others,” Bruning says.

After returning from Spain, Bruning began editing her project and putting it together, again with financial assistance from the UNH Hamel Center for Undergraduate Research. She also received advice and guidance from the experts at Florentine Films. However, the film truly has been an independent effort for her and she hopes it will lead to a career as a filmmaker.

And like any first-time filmmaker, she’s a bit nervous about the film gala.

“My friends say it’s very normal to be very nervous when you get this close to the end of a film project. I have friends and family coming from out of state to the gala, and I’m excited to share this with everyone who has known about it for so long. I am excited about the opportunity to experience the whole filmmaking process and share my love of this culture with other people,” Bruning says.

UNH's Hamel Center for Undergraduate Research provides the resources and financial support for the research, scholarly and creative projects of UNH students. Whether it's investigating moose habitat, examining the effects of the European monetary union, or composing music for a dance concert, each year students from all fields of study receive grants to embark on their own explorations. For more information, visit http://www.unh.edu/undergrad-research/.

The University of New Hampshire, founded in 1866, is a world-class public research university with the feel of a New England liberal arts college. A land, sea and space-grant university, UNH is the state’s flagship public institution, enrolling 11,800 undergraduate and 2,400 graduate students.