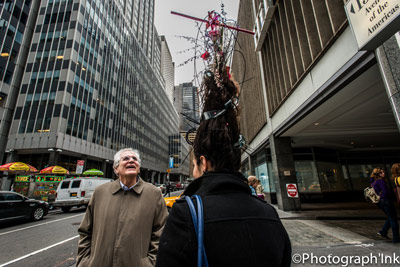 Hendayan artist Christophe Pavia and the president of Euskaldunak Quebec Daraspe Adelaide, are the creaters of "Zortzi", a modern vision of the Basque carnivals and a aesthetics of joaldunak, the carnival´s participants. On March 7, the show was presented at the Rialto theater in Quebec and, as expected, left the audience amazed with the hairstyles Pavia created live in just a few minutes. From Québec, the work made the jump to New York, where Pavia gave a presentation at the headquarters of Eusko Etxea. New Yorkers, people of all kinds of aesthetics, couldn´t resist double-takes when exposed to the hairstyles of Pavia.

Montreal, Quebec. Last March 3, the Basque club in Montreal held a carnival party to welcome the project of Christophe Pavia and Adelaide Daraspe. Manolo Alcayaga, joaldun of "Bidasoako joaldunak", was invited to give a presentation on the ancient tradition of joaldunak and costumes.

After presenting Alcayaga, Christophe Pavia held a small demonstration of his art and artistic hairstyles created on the heads of male and female members who volunteered for the experience. The party ended with a show, put on by the dancers from the center. A spectacular show in Rialto

"But, that was just an introduction of the major project," Adelaide Daraspe told EuskalKultura.com. Indeed, on March 7, the show "Zortzi" was presented at the Rialto Theatre in Montreal, in collaboration with the partners of euskal etxea. "The project aims to present the tradition of Basque carnivals from a refreshing and modern perspective," said Daraspe.

The show began with a video about joaldunak, followed by a live appearance of joalduna on stage: Manolo Alcayaga filled the theater with ancestral echoes of "joareak" (large cowbells carried at the level of the kidneys). Then, live, Pavia created several hairstyles and presented seven caps designed by him and inspired by those worn by the joaldunak. The eighth hat presented was designed by Bernadette Leizagoyen, team member of the Kilimon joaldunak group, from Donapaleu (Lower Navarre). The function ended with a show of the dancers of Euskaldunak and a discussion the creators held with the public.

…and another in New York

From Quebec, "Zortzi" made the leap to New York. On March 9, Adelaide Daraspe gave a talk about the Basques of Quebec and Canada in the Eusko Etxea New York, where he also presented a shortened version of the show. Manolo Alcayaga offered a display of traditional joaldunak while Christophe Pavia created four hairstyles on the heads of four young members of the Basque etxea. The show then took to the streets of the city, where many New Yorkers were surprised to come across Adelaide Daraspe and the hairstyles. "This project has been possible thanks to the collaboration of Euskal Kultur Erakundea (EKE) and we want to give a big "eskerrik asko" for their support," said Daraspe.