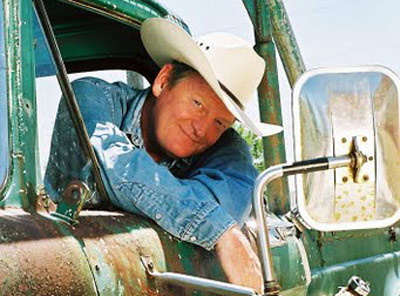 Sheriff Walt Longmire is one of the best-known detective characters currently in the US, where he is even featured in a TV series. Longmire was created by writer Craig Johnson, who is now researching his ninth book. Siruela Publishing has just published the second book of the series, A Death Without Company in Spanish where Longmire investigates the murder of a Basque-American Mari Baroja. “The Basques are part of the American West and it is my responsibility to portray this world with honesty,” Johnson told EuskalKultura.com.

Buffalo, WY.  Some think that there are only cowboys and Indians in the West, but Craig Johnson, author of the mystery series featuring Sheriff Walt Longmire, is including the reality of places like Wyoming, the least-populated state in the US, where many communities have settled, from Basques to Peruvians, who now are part of the local landscape.

In the second book of the series, A Death Without Company, Longmire investigates the murder of Mari Baroja, a former lover of the previous sheriff.  In his investigation, Longmire counts on the help of his assistant Santiago Saizarbitoria, and delves into the world of the Basque community in Wyoming.  The book has recently been published in Spanish by Siruela Publishing entitled, Una muerte solitaria.

“It would be criminal to leave them out”

Longmire’s books are very popular in the US, and have even made the New York Times Bestseller list, as well as being adapted for television.  The series called Longmire is now in its second season and has been one of the most viewed on the A&E Channel.

“Saizarbitoria hasn’t appeared in the series yet, but people are responding to the books.  When I travel, including to the Basque Country, I am often asked if there are Basques in Wyoming.  Well, yes there are.  And in Idaho, Montana, Utah, Nevada…” says Johnson.  “They are my friends and neighbors and it would be criminal to leave them out: they are a part of the American West.”

Inspired by the Basque Community

The names of the Basque characters in the book are inspired by Basque writers that Johnson has read to find out how they think,” he explains.  “The Basque culture has always interested me.  For Americans the story of the Basques is exotic and marvelous, and it easily arouses interest.”  Johnson has also obtained information from his circle of Basque friends and neighbors in Buffalo.  “When I’m on tour in the West I love to visit Basque Museums and my biggest weakness is Basque restaurants,” he confesses.

Not only the names of some of his characters, but also some of his characters themselves, have been inspired by members of the local Basque community.  “It is rare to meet someone who fits perfectly into a novel, so one usually takes parts and details of different people and puts them back together to create the necessary character, a little like Dr. Frankenstein.  This being said, I have to say that I have had some people in mind in the Basque community when it came time to write the books.”

A trailer from Longmire

The series brings together two different aspects of the detective novel and landscapes, solitude and characters in westerns.  The Indian community is very present in the books since the ranch where Johnson lives is close to Crow and Cheyenne territories.  “Indians,” says Johnson.  “All the Indians that I know laugh when they are referred to as Native Americans.”

The mythology of the western also includes a Sheriff’s helper, Victoria “Vic,” Moretti, a woman of character with a foul mouth.  “All the police that I have worked with talk like that,” says Johnson, who before becoming a writer was a policeman.  Along with her are other characters like Cheyenne, Crows, Vietnamese, Guatemalans…and Assistant Saizarbitoria, in a series that serves as a door into the real and contemporary west.  A west that thanks to Longmire and his investigations continues to be captivating as the legendary Wild West.