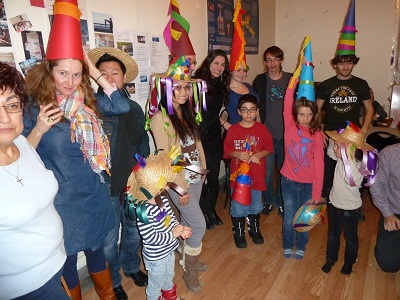 Montreal, Quebec.  The Euskaldunak of Quebec Basque club celebrated Carnival on February 11th with a party that took place at the clubhouse in Montreal.  The festivities gathered around 30 members, children and adults, who started to work at 5pm creating their costumes and Carnival hats during a workshop offered by the club.  The hats were reproductions of those worn in some villages in the Basque Country during Carnival.

[One of the younger members of the club, making his hat at the costume workshop presented by Euskaldunak of Quebec (photo Euskaldunak EE)]

Following the workshop, members enjoyed a light supper that included typical dishes eaten during Carnival: mahatamiak.  In some places in Iparralde these crepes are given to those who walk the streets in costume during Carnival, and Ernest Behaxateguy, club member, gave a very fun demonstration on how to prepare them.

After regaining their strength, club members had the chance to learn more about Carnival in the Basque Country, thanks to club president, Adelaide Daraspe, who gave a talk on the subject.  “It was a really nice day and we are already planning to do more activities for our children because they bring so much life and color to the Basque club,” Daraspe said.