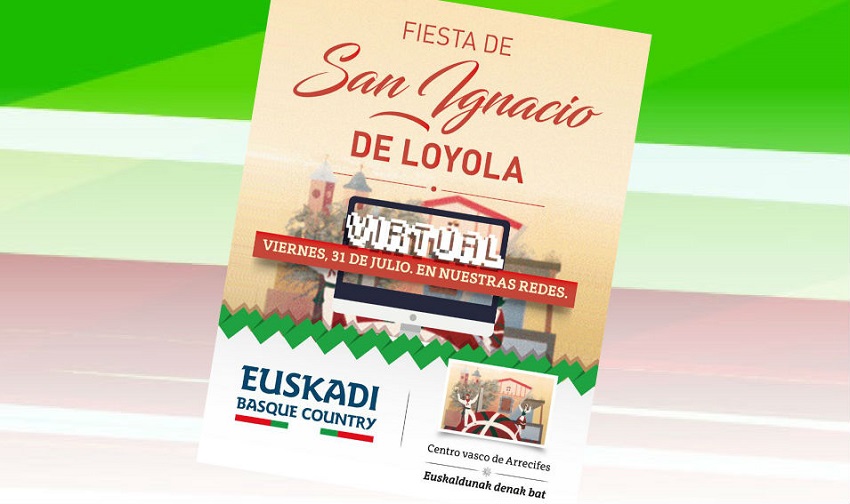 San Ignacio has been celebrated in Arrecifes since 1906

Donostia-San Sebastián. In cities where there was a large Basque immigration, like in Argentina in Arrecifes, the celebration of San Ignacio preceded the creation of the Basque club itself, and so Basque immigrants, mainly those from Bizkaia and Gipuzkoa would gather on July 31st at a festival and dance. With the passage of time, clubs took over the custom and so today, the Feast of St. Ignatius of Loyola is one of the historically most celebrated feasts by Basques, and Basque communities all over the world.

(Born in Loiola, Azpeitia, Gipuzkoa, St. Ignatius is the patron saint of Gipuzkoa and Bizkaia in the Basque Country, along with St. Francis Xavier, also a Jesuit, the most universal of the saints from Euskal Herria)

During this unique year of 2020 and COVID-19, Basque clubs in various countries have let us know “that the festivities will be different, but they will take place.”  Conforming with security measures imposed by the pandemic, a large number of clubs that traditionally celebrate this feast day, will do so with some time of event or function on its social media.

Tomorrow, and during the weekend

There are Basque clubs where the Feast of San Ignacio, traditionally know in places of the Diaspora as Iñaki Deuna or San Inazio, is the most important celebration of the year, and so they have planned for events and virtual celebrations.  This is the case of Basque clubs in Argentina like Laurak Bat in Buenos Aires, and  Euskaldunak Denak Bat in Arrecifes or the Euskal Echea Association in Comodoro Rivadavia, to mention a few of the oldest and most loyal celebrations in the country.

In prior articles we have already mentioned the San Inazio celebration in Boise, Idaho, that is always celebrated around July 31st in conjunction with the local Basque festival, and/or Jaialdi.  This year the virtual mass celebrated last Sunday by Basque chaplain, Aita Antton, included the traditional San Inazio March, and its wekk known lyrics. “Inazio gure patroi handia...”

From the Eusko Etxea in Caracas, Venezuela they have announced that they will celebrate mass on Sunday, August 2nd at 11am local time (5pm Euskal Herria) celebrated by the Jesuits, many of them Basques at the Andres Bello Catholic University that can be followed on the club’s Instagram account.

From other countries, localities and Basque clubs other events have been announced, this year online, and in some cases depending on the phase of the Coronavirus, even in person gatherings with a reduced number of attendees; anyway, the festivity will be celebrated in some of the cities and Basque communities that traditionally celebrate, like Necochea, Madrid, Rosario, Mexico City, Sydney…From Chile we received an invitation to the festivities at the Euzko Etxea in Valparaíso-Viña del Mar on Zoom; also the Euzko Etxea in Santiago let us know that it will do the same on its social media.