Urkullu in Ormaiztegi on Basque Diaspora Day: “We will continue to support you, we will come out of this difficult time” 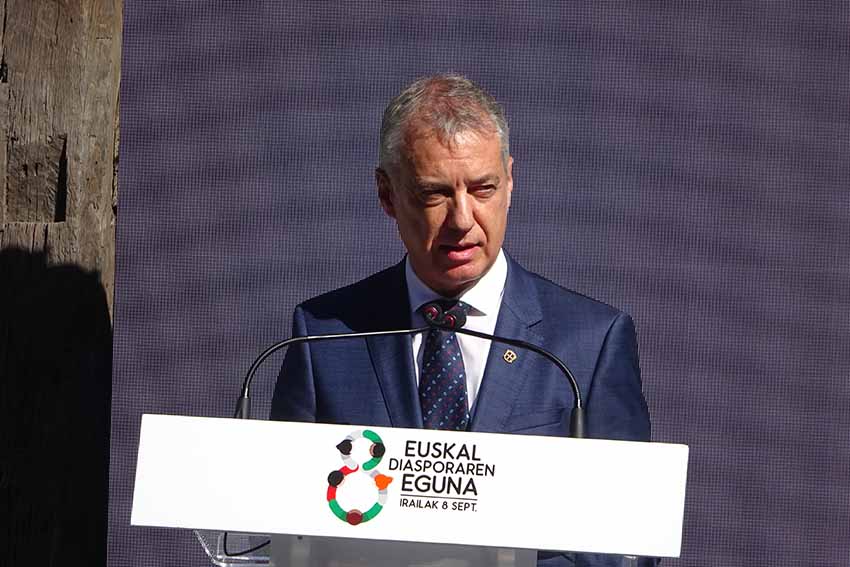 With the sun in his face, the Lehendakari reconfirmed the commitment of the Basque Government to Basques in the Diaspora

Ormaiztegi, Gipuzkoa. The official event celebrating the Day of the Basque Diaspora took place yesterday presided by Lehendakari Urkullu after being re-elected to his third term as Lehendakari last Saturday.  Due to the pandemic, the format of this occasion was much smaller than last year’s and the majority of attendees were local, although dancers from here and others from around the world gathered onscreen for a dance.  The words of Urkullu to Basques all over the world resounded, “We will continue to support you, we will come out of this difficult time” (see below the video with his entire speech).

Among those attending were: the President of the Basque Parliament, Bakartxo Telleria, the Deputy General of Gipuzkoa, Markel Olano, the Mayor of Ormaiztegi, Jon Enrique Galarza and his counterpart from Urretxu, Jon Luqui Albisua.  On behalf of Eusko Jaurlaritza the Secretary General of Foreign Affairs, Marian Elorza, as well as the Director of the Basque Community Abroad, Gorka Alvarez Aranburu, were also in attendance, along with Parliamentarian Jasone Agirre and the Director of the Etxepare Basque Institute, Irene Larraza.

Before going to the plaza, the Lehendakari and his companions visited in Ormaiztegi the “Leopoldina Rosa: A History of Today,” exhibit at the Zumalakarregi Museum that presents and compares the Basque emigration in the 19th century to current migrations to Ormaiztegi, a village of 1,300 inhabitants that today has residents of 25 nationalities.

Then in the plaza, journalist Ainhoa Garcia presented the official event.  After a greeting and welcome by Mayor Galarza, two dancers took the stage to who were joined by several other dancers around the world on screen (see second video below).  Actors José Kruz Gurrutxaga and Miren Arrieta performed a figurative colloquium between Josemari Iparragirre and his wife Anjela Kerexeta.  Lehenkdari Urkullu’s speech was the finishing touch on the day.

The first video is a summary of the first part of the program, concluding with the Lehendakari’s address

Second video: Thanks to a screen, a dance shared between dantzaris in the Basque Country and the Diaspora: