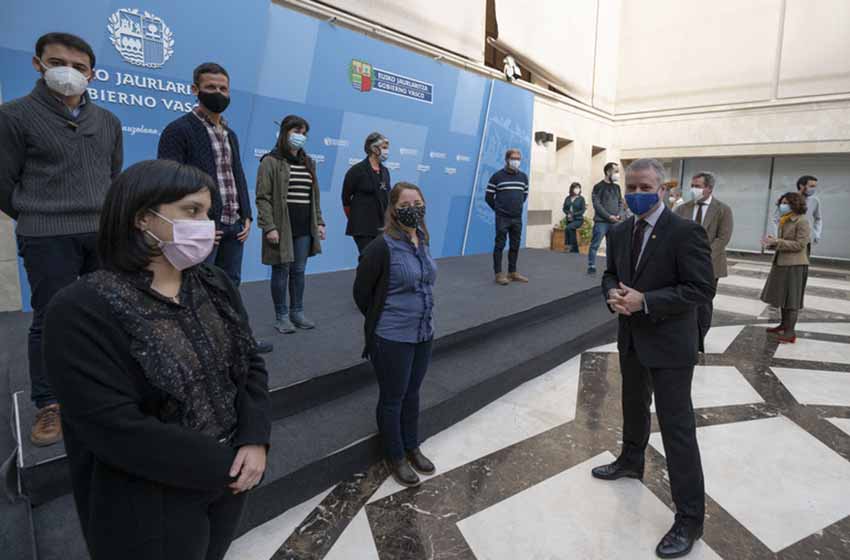 Vitoria-Gasteiz. Lehendakari Urkullu welcomed this morning 11 student/teachers from the Argentina, Uruguay and Chile who have been studying Euskera at the Barnetegi in Lazkao at the Lehendakaritza in Vitoria-Gasteiz. The group arrived accompanied by the Director of the Euskara Munduan Program, Kinku Zinkunegi, and also were met by the Minister of Culture, Bingen Zupiria, the Secretary General of Foreign Action, Marian Elorza, and the Director of the Etxepare Basque Institute, Irene Larraza.

The Euskara Munduan Program at the Etxepare Basque Institute aims to train local Basque teachers at Basque clubs around the world.  Over four years, the students follow a curriculum complemented by two annual barnetegis, in this case in South America.  Once that training is complete, they can complement their training with a Barnetegi in Euskal Herria in Lazkao.  During these four years, they also begin to teach classes at their respective Basque clubs, the final goal of the program.

Their Barnetegi in Maizpide concludes at the end of next week, and participants will return home then, although in a couple of cases, they will stay longer in the Basque Country to expand their Basque instruction.