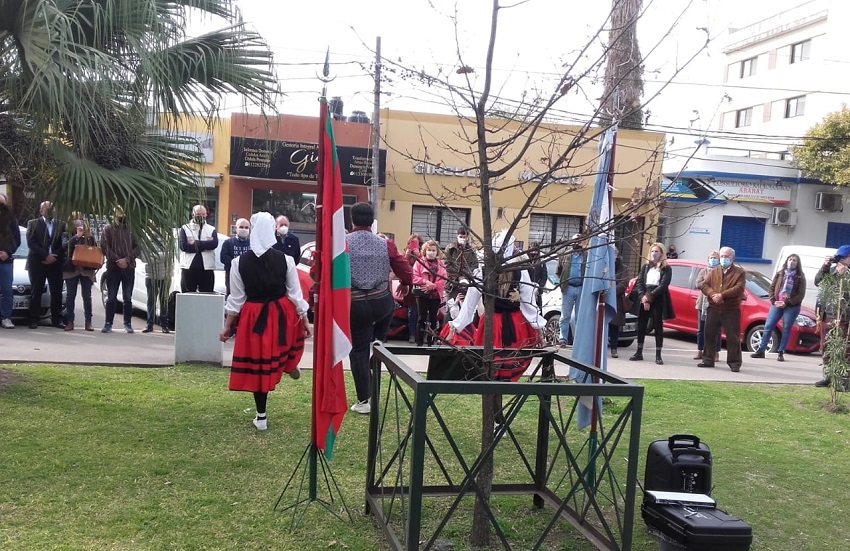 Gral. Rodríguez, Argentina. More than 50 people gathered in front of the oak in the Martin Rodriguez Plaza in the city of General Rodriguez to celebrate the 22nd anniversary of the Eusko Aterpea Euskal Etxea.  Among the participants were the president of FEVA, Arantxa Anitua; secretary Miren Arozarena; Laurak Bat’s president, Jose Gabriel Anitua, and the president, representatives and members of Eusko Aterpea as well as other local institutions.

During the event, Juan Itcea, president of Eusko Aterpea, thanked everyone in attendance for coming and presented a summary of the club’s history, since its beginnings “when the first walls of the clubhouse went up, to now,” Raul Taretto, club reference said.

An Arresku was performed in the park and plaza by club dantzaris, and a tribute was paid to founding members of the club as well as to all the members of the community that have passed away.

After the event in the plaza, the hosts and guests when to the clubhouse.  There, the municipal press secretary, Sebastian Picardo, and FEVA president Arantxa Anitua were invited to unveil a commemorative plaque.  Before sharing a toast, both addressed the audience and toured the newly renovated premises.

Raul Taretto stressed that as part of the 22nd anniversary festivities, the club received a donation of books from the family of historian Luis Besozzi.

Encouraged by the celebration and with the conviction that work is what allows them to keep growing, members of the Eusko Aterpea Basque Club in Gral. Rodriquez will light the burners again this Saturday, September 11th.  The menu will be “Calamari Biscayan style,” and information on how to order can be found here.