California: Last weekend Basque Festival and NABO meeting in SFO, and this weekend in Chino: beginning of a new school year 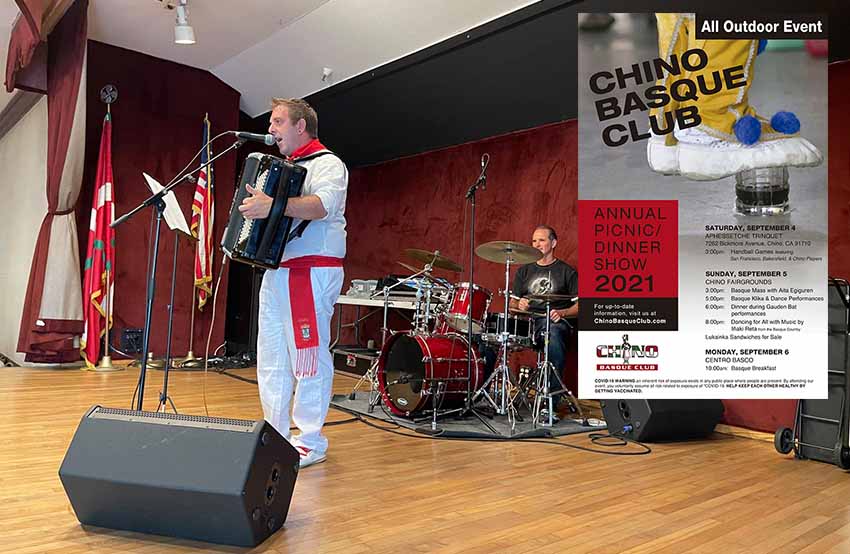 Musician, Iñaki Reta, last weekend at the Basque festival in San Francisco will also be in Chino this weekend

Chino, California, USA. This week we left August behind, and are already in September, which means a new school year in the Northern Hemisphere. The fight against the pandemic continues, although Basque clubs are becoming more optimistic and in person activities are taking place in more places, with variations depending on countries and regions.  Let’s go little by little.  As a sign of the farewell to August the “Udako Besta,” summer festival took place at the San Francisco Basque Cultural center last weekend.  It was an in person event respecting protocols in place.  Large Basque festivals aren’t back yet.

The Udakeo Besta, is an event to say goodbye to summer each year at SFO.  Euskera was present in names and in writing last weekend, as it always has been in this Basque community.  Last Saturday in conjunction with the festivities, NABO, the federation of Basque clubs of North America held its annual convention meeting with some attending in person, and many others attending online.  Elections were held and Philippe Acheritogaray and Mayie (Berterretche) Petracek were reelected president and treasurer respectively. The weekend passed quietly, modest in terms of number, but enjoying it regardless in an atmosphere of camaraderie.

Again last weekend, we move to Quebec to congratulate the Euskaldunak of Montreal on its 25th anniversary celebrated last Sunday at the Parc Le Bere.  The event included gathered children, families and adults, beginning at 9am with a Mus Tournament, that ran all day.  There was no lack of singing and good food, and games for all ages along with musical entertainment.

Another birthday took place last weekend in Argentina at the Eusko Aterpea Basque Club in General Rodriguez in the province of Buenos Aires who celebrated its 22nd anniversary on Saturday.  Also on Saturday, members of the Brussels Euskal Etxea held gathering and “txoko” type dinner.  In Boise, Idaho, on the same day, members of the Basque Museum celebrated its Winefest, a charity event with wine tastings and an auction, the proceeds of which go to the Museum and the Boiseko Ikastola.

During August, the Euskal Bestak also take place in Saint Pierre et Miquelon, this year marking its 38th edition.  Again a great success with pelota and celebrations in its cancha “Zazpiak Bat,” constructed in 1906, and its trinquete.  After providing musical entertainment for the week, the Hiruak Band comprised of Jean-Louis Bergara, Battite Garat and Beñat Chaubadindeguy, have now returned to Euskal Herria

This first week of September, the intention was to summarize August since we were not publishing our daily bulletin; however, we were updating our events section and social media, and would now like to welcome a new school year.  We will now conclude with the Chino Basque Club whose Basque festival is this weekend, inaugurating the season.

This Saturday at the Aphessetche Trinquete in Chino there will be pelota matches between pilotaris from San Francisco, Bakersfield and Chino. On Sunday, the picnic will begin at 3pm with mass celebrated by Franciscan father Antton Egiguren.  Aita Antton’s weekly livestreamed mass will take place on Sunday morning at 8:45am after which he will travel to Chino. In Chino presential mass will include the participation of the Besta Berri dantzaris, the klika and club dancers (Gauden Bat, Xori Ttipiak, Eskualdun Izarrak and Dantzari Onestak) will be part of the all day long festival. They will be accompanied this year by Iñaki Reta who is in California this year and will provide musical entertainment as he did last weekend in San Francisco.  On Monday, Labor Day, there will be a Basque brunch at the Centro Basco owned by the Berterretche, a Chino classic.

Great way to start a new school year! Enjoy yourselves!