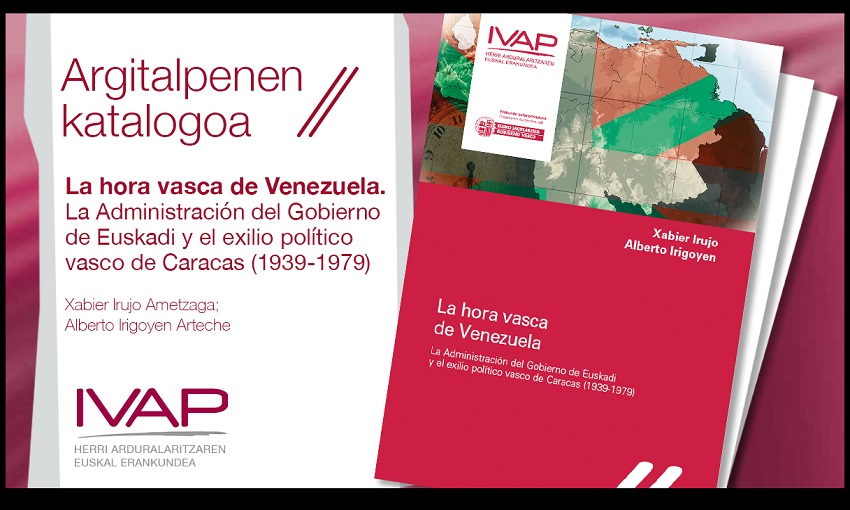 Caracas, Venezuela. The book La hora vasca de Venezuela. La Administración del Gobierno de Euskadi y el exilio político vasco de Caracas (1939-1979), (The Basque Time in Venezuela. The Administration of the Government of Euskadi and the Basque Political Exile of Caracas (1939-1979)), by historians, Xabier Irujo Ametzaga and Alberto Irigoyen Artetxe, was published by IVAP-HAEE (The Basque Institute of Public Administration-Herri Arduralaritzaren Euskal Erakundea), on whose website it is available for purchase in paper, or also to download in a PDF.

Organized in 10 thematic chapters, plus an annex of documents, La hora vasca de Venezuela reviews the history of the arrival of Basque immigrants to the Caribbean country, from its formation as a republic until the twentieth century, paying special attention to the period from the beginning of the War in 1936 to the end of the 70s,

In this time lapse, the authors analyze points such as the position of the Venezuela government regarding the arrival of Basque refugees during the War of 36, the consolidation of the migratory process of Basques to Venezuela and the consequent constitution of Basque entities; and the emergence and history of the Caracas Basque Club.

Irujo and Irigoyen conducted research on the activities that took place at the heart of the Euzko Etxea in the Venezuelan capital, as well as on projects related to it.  To complete the approach, they dedicate a chapter to “Basque Youth in Caracas,’ to the formation of Basque clubs in the interior and to the Federation of Basque Entities of Venezuela; and finally to the Venezuelan Basque press.

Due to the current health situation, the authors have not been able to present the publication yet, but told EuskalKultura.eus that they may do so next year, “if the conditions permit us to travel to Euskadi,” according to Irigoyen.