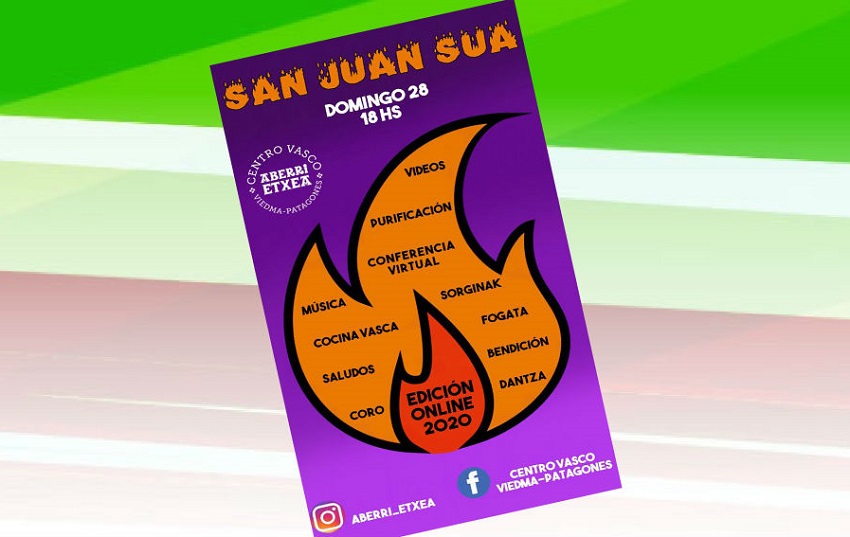 Buenos Aires, Argentina. Sainy John is one of the most recognized festivities at Basque clubs throughout the Diaspora, maybe because it invites everyone to come out and celebrate together; or maybe because with the anticipation of the arrival of a new solstice all the bad goes away, while the good comes.  It doesn’t matter the reason, every June dozens of Basque clubs around the world light a fire for San Juan and dance, sing and celebrate around it.

Many clubs made wishes like these, on social media, sharing photos and videos of festivities from years before.  Others held virtual activities like a talk by Nahia Inthamoussu at the Haize Hegoa Club in Uruguay; or the online happy hour organized by the Basque Museum in Boise in the United States, where attendees were shown how to make the “best kalimotxo,” by the well known basquephile and doctor of history, John Ysursa, who talked about the Basques and the celebration of Saint John…

At the Union Vasca in Bahia Blanca, Argentina, they celebrated this different edition of San Juan with a video with greetings, including one from a special guest in Euskal Herria.

[San Juan Bonfire 2020 in Bahia Blanca.  In the video, Gorka Alvarez Aranburu sends his message for the community]

Another option was this one proposed for next Sunday by the Aberri Etxea Basque Club in Viedma y Carmen de Patagones, also in Argentina.  The club invites everyone for an afternoon of celebration, albeit virtual, not wanting San John to pass unnoticed; there will be a bonfire, dances and music provided by the club's dantzaris and choir; Basque food, blessings and purifications, and since this celebration was originally pagan, doctor of history Ruben Suarez will give the talk entitled “Why do the Witches appear on San Juan.  Contributions to the celebration of popular festivities and the empowerment of San Juan Sua by the Aberri Etxea Basque Club.”

The event will be this Sunday, the 28th beginning at 6pm and will be published on the club’s social media: Centro Vasco Viedma – Patagones and Aberri_etxea