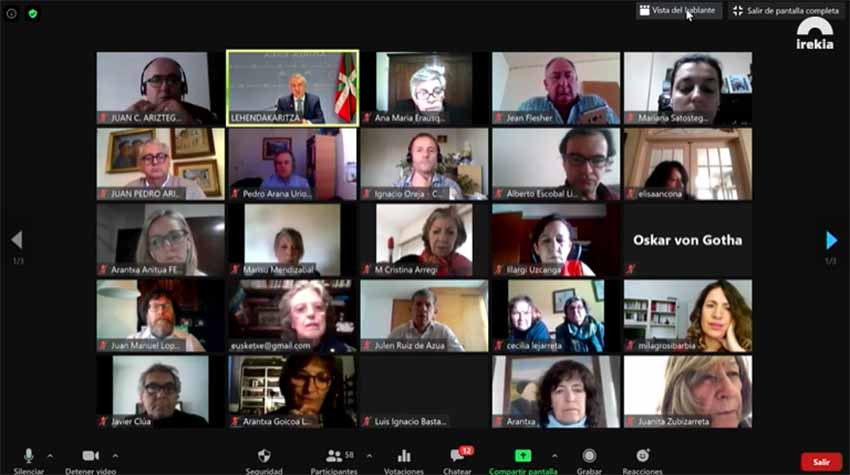 Vitoria-Gasteiz. This is how the Lehendakari was assured yesterday at a meeting held via Zoom.  Reporting matter-of-factly, the image they transmitted to the Basque Government clearly reflected that the Euskal Etxeak are not free from the situation caused by the COVID-19 pandemic at an international level.  On the bright side: according to the data they have, the Coronavirus has not had a significant impact on Basque community in terms of cases, although it has affected activities, operations and had an economic impact.

Although it is still too early for a detailed evaluation, after the suspension of all face-to-face activities, but despite this frankly negative fact, they pointed out that there have been many Basque clubs in the world that have reacted and have adapted their programs as much as possible, converting everything to online activities, with virtual meetings, turning their various activities into virtual sessions, with Basque classes, conferences, dance group rehearsals, etc. all now taking place online.

It was made clear that the situations vary greatly from one country, one region, or one state from another. In many cases they are far from getting back on track, particularly in America where the bulk of the Basque clubs are located, and specifically in South America but also in the US and Mexico.  Testimonies were presented from Peru, Brazil, Venezuela, Chile and Argentina, and the setbacks experienced there are a very current phenomenon with many countries still awaiting the so-called peak.

The pandemic cut all Basque club activity, without warning, obliging them to close clubhouses, and in the best of cases, motivating the creation of new activities online, and in some cases reinforcing them. The obvious damages that come along with this, including damage to groups of children and elderly besides the economic impact.  Many clubs rely on festivals, meals, Mus tournaments, and other events for their income, and with these being cancelled, including clubs with restaurants or concessions, are now out that income, while maintenance expenses continue.

Arantxa Anitua, President of FEVA and member of the Lehendakari’s Advisory Board, stressed the impressive response by the Basque community to the situation, highlighting its strength and commitment, although in Argentina, the health and economic crisis caused by the Coronavirus is further aggravating the existing economic crisis there.  Unai Lauzirika, also member of the Advisory Board, commented, among other points, about the serious situation in which young Basques who are/were studying and/or working in Australia are facing.  He also remarked that the Barcelona Euskal Etxea had to ask for ERTEs and lower its structure; and Basques in London continue with the Damocles Sword of Brexit on them.

From the United States, Kate Camino explained that California is still closed, and that in Nevada, for example even if Casinos are reopening, the University is still closed with all Basque events begin cancelled.  Ana Mendiola spoke from Boise and thanked everyone for the support after having to rescheduling Jaialdi for next year.  FIVU’s president, Juan Pedro Arin, also spoke from Uruguay, about “responsible freedom” in face of the pandemic, providing the information that at the national level, a leader of the Basque community, Dr. Asqueta is the maximum reference for the national fight against the pandemic.

The Government: we will examine this and face it together

Other government officials joining Lehendakari Iñigo Urkullu at the meeting included Marian Elorza, Secretary General of Foreign Action, Gorka Alvarez Aranburu, Director of the Basque Community Abroad. In his various interventions, the Lehendakari summarized the situation in the Basque Country in relation to the pandemic and the response provided by his government, while Marian Elorza answered questions asked by some club representatives. The government stressed that the Euskal Etxeak and the Basques of the Basque Country will emerge from this situation by working together; Now it is time to analyze the situation, and work together on the most appropriate way to face it.

Urkullu said that the priority in the Basque Country at first has been health, and that the health crisis is followed by others, such as emotional health and the economic crisis, which must be addressed with determination. He acknowledged to the members of the euskal etxeak and the Basque communities of the world the response offered so far, knowing how to adapt, showing his most solidarity and mutual aid facet, both within the Basque community, as well as to the local communities and nationals to which they belong.