In Bogota, “El Vasco” makes the best omelette in town and they signed an agreement with the Basque club 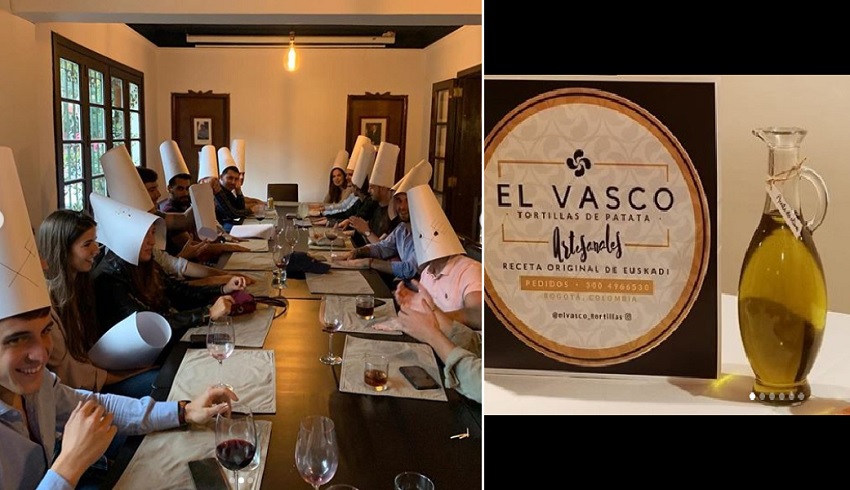 Bogota, Colombia. Led by Goio Usunaga Beltran de Gebara, Chef from Bilbao, the Basque-Colombian gastronomic venture, “El Vasco,” specializes in Bogota in the creation of artisanal omelettes “from an original recipe from Euskadi,” according to its advertising, although it also includes other typical recipes from Euskal Herria.  The establishment has just signed an agreement with the Basque club in Bogota so that club members will receive 10% of its orders.

The health and economic crisis have affected the whole world, but it has hit different countries especially hard, in the north and south of the American continent, having a strong impact as well on the Colombian capital. To make this situation more bearable, and to provide a new service to its members and friends, the Basque Center in Bogota established this agreement with the firm “El Vasco.”

The Basque club in the Colombian capital is currently led by Eneko Laiz, with Jose Vicente Katarain serving as vice-president, and Beñat Matesanz as its executive director.  As Matesanz told EuskalKultura.eus, the club is currently closed to the public due to the pandemic, but the goal of its members is ‘to continue working so that more people get involved and come to the Basque club.”

Matesanz explained that during the year they usually celebrate “the typical Basque festivities, that usually gathers some 35 people, Basques who live in Bogota as well as some Spaniards,” he added.  The Tamborrada in January was the last event held before the pandemic.

Currently, Instagram is the best way to contact the club here: Bogota Basque Club. The clubhouse is located on Transversal Street 16 A 46-70 in the Colombian capital city in front of the Gernika Park.