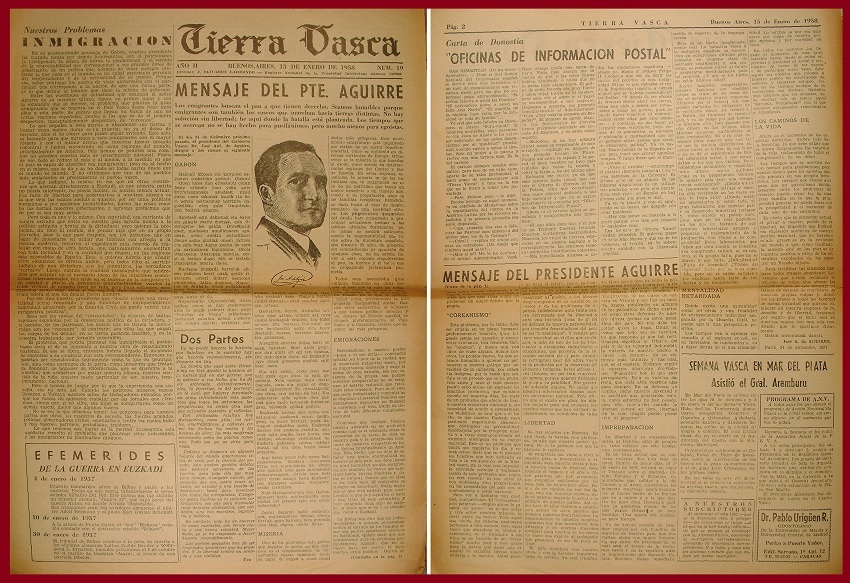 Christmas messages from Agirre in the Basque press in Buenos Aires

On the 80th anniversary of the Basque Government and the election of Jose Antonio Agirre as the first Lehendakari, the “Agirre Lehendakaria” group has launched the “Gabon” initiative to commemorate the end of year messages that Lehendakari Agirre used to send to Basques in Euskal Herria and the Diaspora.  They are inviting everyone to record a short Christmas message and send it by December 10th.  All of the greetings received will be compiled into a video that will be broadcast on December 13th. It will be available via streaming all over the world.

Buenos Aires, Argentina.   The Delegation of Euskadi in Argentina and Mercosur has forwarded an invitation to the Basque clubs in its area, as well as to the Diaspora in general by the ‘Agirre Lehendakaria’, group that encourages everyone to record a Christmas message and send it to them.  All of the messages received will then be compiled into a video to be broadcasted at a public ceremony that will be held on December 13th that will also be made available around the world via streaming.

“Keeping in mind that Lehendakari Agirre spent a large part of his term in the Diaspora, working side by side with people who live outside of Euskadi, we wanted to expressly recognize those that work in anonymity, as well as those not so anonymous individuals who worked for the perpetuation of the Basque culture and values,” sources from 'Agirre Lehenendakaria' explain.

“Since the Diaspora has played and plays an important role in the maintenance of our roots all over the world, we wanted to reach out to these communities abroad to help us put the final touch on the commemorative activities in honor of this 80th anniversary of the Basque Government and its first Lehendakri.  With the 'Gabon' initiative we are recalling the Christmas messages sent by Lehendakari Agiirre to all of his constituents, to the Basques in the diaspora as well as those in the homeland.”

There are several projects planned for this anniversary that have begun over the last few months.  Five documentaries have been filmed in honor of Lehendakari Agirre and there is also a photo exhibit in his honor.  In Argentina the Zazpirak Bat Basque Club in Rosario and Laurak Bat Basque Club in Buenos Aires have joined in the commemoration and talks have been held.  In Uruguay, FIVU organized a tribute to the Lehendakari, in this case on the 75th year since Agirre’s arrival there.