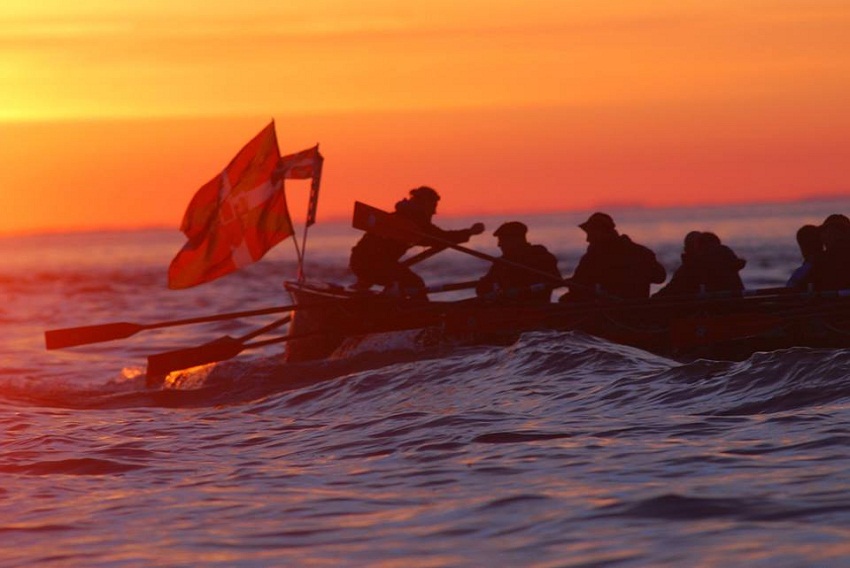 Photo from a prior expedition (photo Indianoak)

Next August, a group of rowers from Iparralde, Gipuzkoa and Bizkaia will travel to Newfoundland to participate in the Ternua 2017 expedition.  Members of the expedition will leave from Placentia and will travel 400 kilometers to the islands of Saint Pierre and Miquelon.  There they will join in on the Zazpiak Bat Basque Club’s festival.

Donostia-San Sebastian.   The Ibaialde-Indianoak Association in Iparralde has now begun training for an expedition that will take a group of Basque rowers to Newfoundland next August.  The goal fo the trip is to strengthen relations between Basques in the Basque Country and descendants of the Basque whalers who live in this part of North America.

The Indianoak are experts in this type of expedition since they have already carried out two others, one in 2003, and another in 2013.  The adventure is engaging.  Their first expedition took them up the San Lawrence River and on the second one, they rowed Trois Pistoles to Montreal.  This time they will travel 400 kilometers from Placentia to the islands of Saint Pierre and Miquelon.  Ten days across icy seas and rowing among the whales.

One of the promoters of the trip is Michel Lastiri, who currently resides in the Basque Country, but who lived for several years in Saint Pierre and Miquelon.  “I used to have a Basque restaurant and I met many sailors on the ships that came from Pasaia, Donostia and Bermeo, Lastiri tells EuskalKultura.com.  One of the goals, is to recover the relationship that the Basques in Saint Pierre and Miquelon and those in the Basque Country had, before the fishing campaigns in the area declined.

Lastiri and Indianoak are in touch with the League of Basque Pilota in Saint Pierre and Miquelon and with the local Basque community who organize the Basque festival annually.  “We want to support the Basque culture in the rea and support the Basques there with their project of having a big Basque clubhouse by 2018,” Lastiri says.

The trip will also serve to promote cultural exchange between both sides of the Atlantic.  In order to do this, the expedition will travel with rowers from both Iparralde and Hegoalde, to the Americas to be joined by rowers from there and those from the nearby Basque club in Montreal.  In a previous trip, the Indianos donated a trainera to the Basque club in Quebec, and since then they have held rowing classes which has become one of the most successful club activities.  On this trip, the trainera will be donated to the Basque club in Saint Pierre.

During the trip, on each of the stages activities are begin organized, cultural activities, workshops, concerts with the 10 musicians that are accompanying the expedition….But the adventure, at least in regards to the cultural exchange, has already begun.  ‘We are working with the youth and we have already gotten in touch with schools in Kanbo, Itsasu ,Uztaritze…with schools in Saint Pierre and Miquelon.  They are studying subjects like the Diaspora, whales, and this exchange will be very enriching,” Lastiri added.

More information about the project on the Indianoak website: