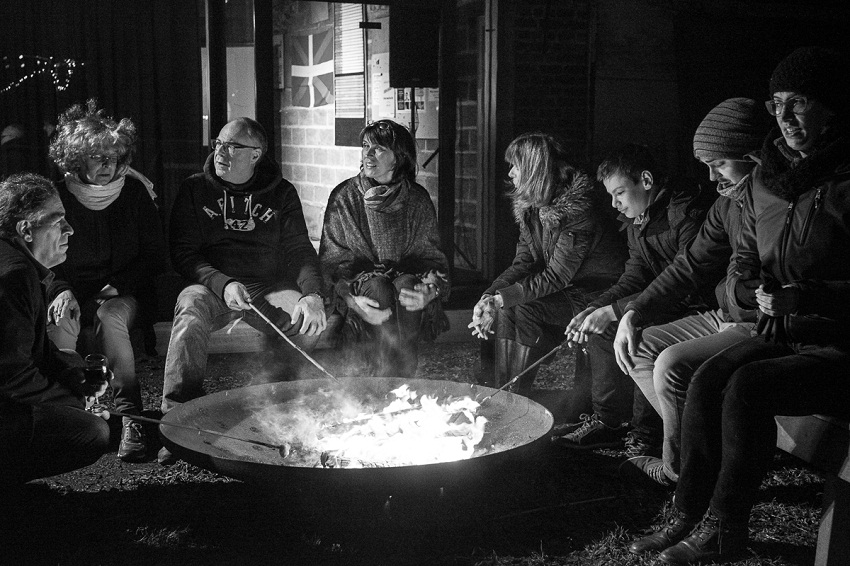 The spirit of auzolan, community work, has no boundaries, as was shown at a Txitxiburduntzi in Lendelede (Belgium), to support the renovation of the 400 year old Baserri in Bedarona, Bizkaia.  The event included the participation of the Txalaparta Choir from the Brussels Euskal Etxea, and the money raised is for renovating Olabe’s roof, a baserri who new owners wish to convert it into a place for cultural encounters.

Lendelede, Belgium.   On November 19th in the town of Lendelede (Western Flandes) there was a very special cultural event: a Txitxiburduntzi.  The name is the only complicated part for the locals, but nevertheless they were able to gather 70 people.  The success, according to organizers had a lot to do with the time of year and the weather.

“We were very lucky because it rained on Friday and there was a storm on Sunday, but Saturday was perfect,” Manu Behaeghe, promoter of the event, along with his wife Karien, said.  The goal of the event was to raise money for the renovation of Olabe, a baserri in Bizkaia whose young owners, Joseba Attard and Joanna Matthews, purchased it hoping to turn it into a cultural center.

The festival’s main element was the tradition of txitxiburduntzi, barbecuing pork products like txorizo, txistorra etc. over a fire.  So participants gathered around the fire and each prepared their meal.

“From 6pm, people of all ages gathered around the fire and BBQ’d their txorizos.  Some of them burned, but we were all able to enjoy the taste of txorizo, that many had never tasted before.  They also appreciated the txakoli a lot, as evidenced by all the empty bottles we picked up,” Manu, a Belgian of Basque origin, said.

When it cooled off, the festivities moved inside, decorated with Ikurriñas.  The comedy Eight Basque Last Names, was shown and the evening included musical entertainment.

At 9:30pm members of the Txalaparta Choir from the Brussels Euskal Etxea performed a recital.  “They sang classics like "Bagare," "Agur Xiberua," and "Hegoak". The last song was taught to the audience and after their performance, people continued sining,” Manu said.

The story of the day was that the choir was late because they had a flat tire.  But once they made it, Manu held a video-conference call with Joseba Attard, owner of Olabe, and when the phone was passed to the choir, one of them recognized their hometown of Elorrio.

The festivities ended at dawn with great ambience and the satisfaction of having made 750 Euros that will go to help work on the roof at Olabe, a first step towards giving this cultural project life.

More information on Olabe, in a prior article: Joseba Attard, Basque-English graphic designer, surfer and sheep shearer wants to recover the Olabe Baserri in Bedarona 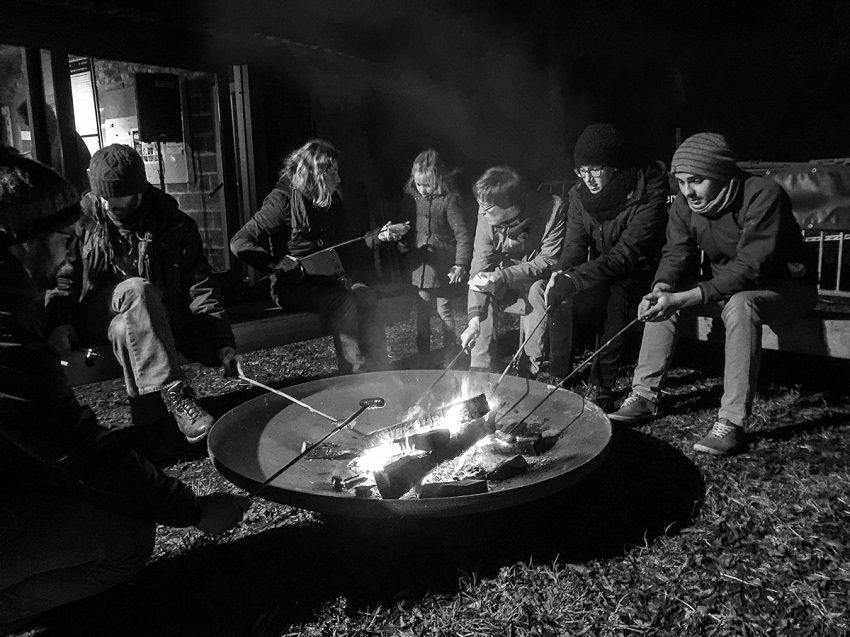 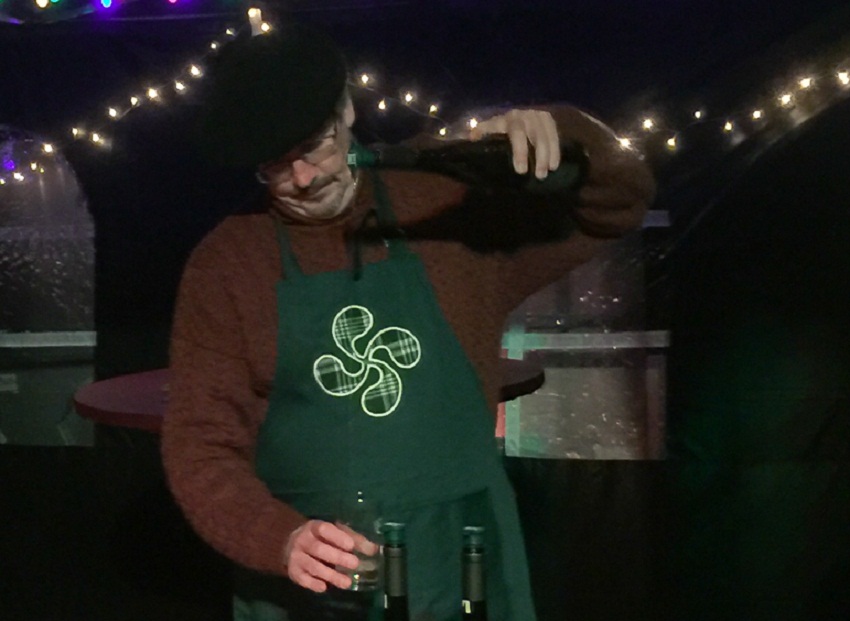 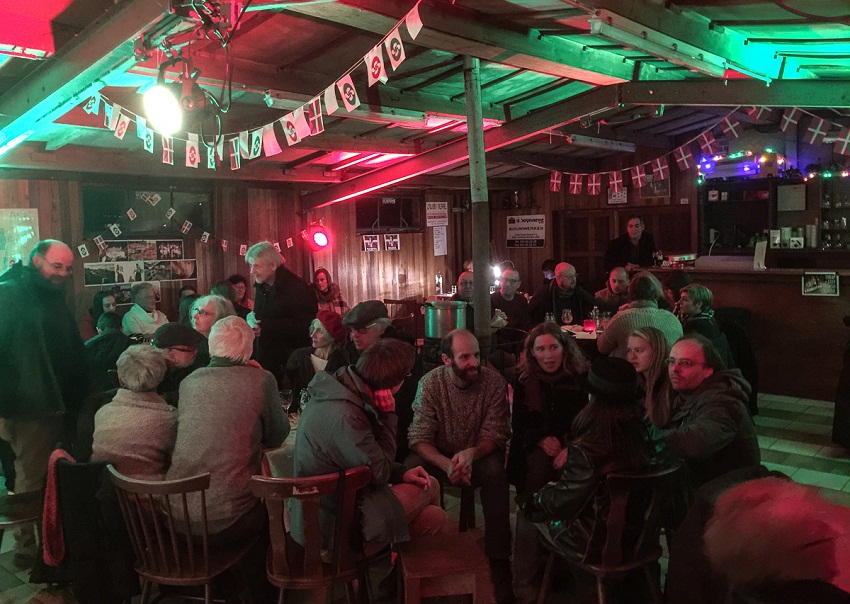 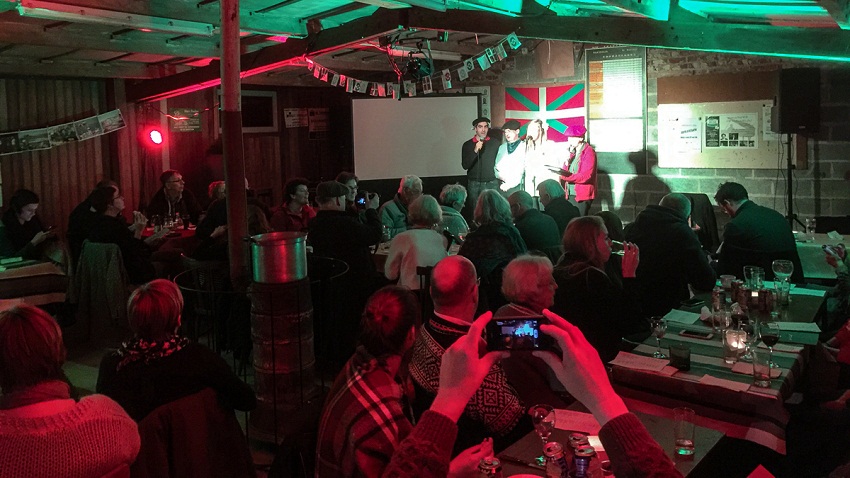