In memory of journalists David Beriain and Roberto Fraile, murdered in Burkina Faso.

This article originally appeared in Spanish at EuskalKultura.eus and has been translated and published in English at Buber.net. 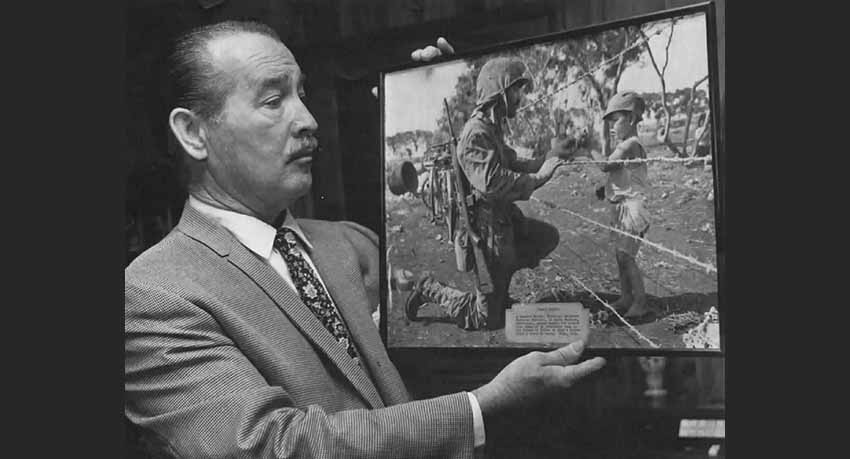 Federico Claveria observes a photograph of himself giving a candy to a boy from Tinian interned in 1944. (Photo from the Department of Defense, US Marine Corps (USMC), 41922 [1], 1969).

On October 22, 1912, 25-year-old young Navarrese Saturnino Clavería Razquin, born in Altsasu in 1886, crossed the border between Mexico and the United States (USA) through the pass between Nuevo Laredo, Tamaulipas and Laredo, Texas, fleeing the consequences caused by what will later be known as the Mexican Revolution, which began in 1910. Three days later, his wife María Maldonado López, also born in 1886 in Valle de Ignacio Allende, Chihuahua, Mexico, and his children, Federico and Miguel, born in Mexico City in 1908 and 1910, also crossed. It was at the Laredo border crossing when, at just four years old, Federico saw the American flag for the first time, a memory that would follow him for the rest of his life, and that would later regain a new meaning during his participation in the Second World War (WWII). For a few years they resided in Bexar, Texas, then later moved to Huntington Park, in the Californian county of Los Angeles, and from there, finally, to Santa Barbara, California.

Raised between Texas and California, from the mid-1930s Federico began a fruitful career as a commercial artist for both the RKO Service Corporation and Warner Brothers Pictures in Los Angeles, two of the largest film studios of Hollywood’s golden age. Moved by the patriotic fervor that swept through the United States as a result of the Japanese attack on Pearl Harbor, Federico tried to join the Marine Corps, but was rejected because he was not a US citizen. He had applied for citizenship in 1937, but it would not be granted until August 1942. With papers in hand, legend has it that Federico entered the Marine recruiting office believing himself safe from any objection. However, he was rejected during the medical examination. Federico was color blind [2]. However, given Federico’s cinematic past as a camera operator, the recruiting officer granted him a medical exemption. Finally, Federico enlisted in the Marine Corps on October 1, 1942 in Los Angeles. What was the interest of the Marine Corps in cinematography? [3] 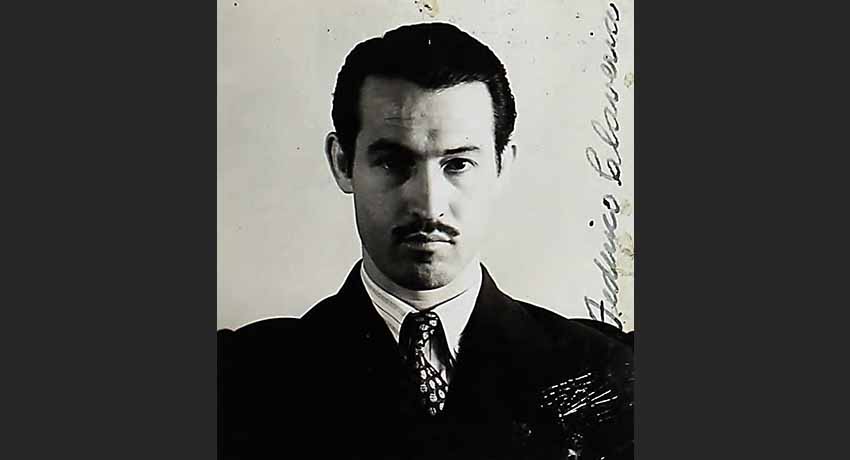 Photograph of Federico Claveria in his 1937 US citizenship petition in Los Angeles.

Following the Japanese victory over the heroic resistance of the US Marines and civilians during the invasion of Wake Island on December 23, 1941, the Marine Corps felt a moral obligation to witness the service rendered by its men on the front lines and thus ensuring more publicity for the Corps itself.

In early 1942, Marine Corps Brigadier General Robert L. Denig was assigned to organize and direct the first Marine Corps Public Relations Department to report on its soldiers in combat zones. Consequently, reporters and photographers with at least five years of experience were recruited as war correspondents, calling themselves “Denig’s Demons” [4]. As Maslowski notes, “Unlike other armed forces, the Marine Corps had not formally organized photographic units […] Before Tarawa, the Marine’s photography had been unimpressive. Wake Island had been missed entirely, and coverage of the six-month battle for Guadalcanal was sparse. [The Marine documentary] This is Guadalcanal […] did not contain a single truly exceptional ground-combat scene. But by late 1943, the Marines were well organized photographically” [5].

After completing a six-week period of training as combat troops, Federico, like his colleagues from the Public Relations Department, would eventually be granted the rank of sergeant and would be sent abroad with combat units. Photographers and camera operators like Federico swapped the carbine for 45 caliber pistols. Federico was assigned to the 24th Regiment of the 4th Marine Division, covering three amphibious operations in the Pacific in a period of eight months. 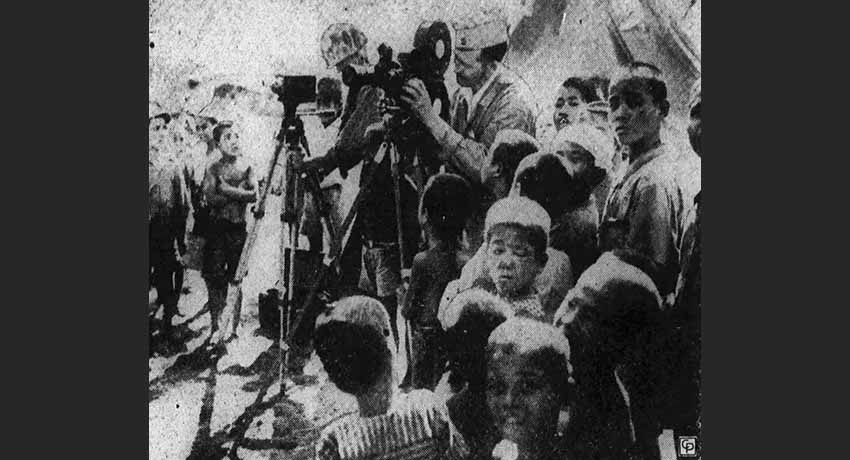 Federico Claveria (right) and his partner Sergeant William C. Fitch surrounded by children in Saipan during a recording in the internment camp established after the capture of the island (The Evening Herald, July 20, 1944).

“Before each of his three amphibious operations he asked the ship’s chaplain to say a prayer, not for himself but for his family so that his parents would ‘feel tranquility and peace of mind’ if he died in action. Kwajalein was his first assault […] he went in with the third wave, sea-sick and scared […] Once ashore the nausea ceased and his nerves calmed down. He first filmed subsequent landing waves arriving on the beaches, then turned and photographed the Marines’ advanced” [6].

Together with the 24th regiment, Federico took part in the battles of Kwajalein (January 31-February 3, 1944), Saipan (June 15-July 9, 1944), and Tinian (July 24-August 1, 1944). Another Basque, first-class Marine Lawrence Erburu from California, also happened to be part of the 24th regiment. With the assault on the islands of Roi and Namur in the Kwajalein Atoll, in the Marshall Islands, the Americans managed to penetrate for the first time the outer ring of Japanese defenses in the Pacific. The US lost about 200 men, while only about fifty Japanese out of 3,500 managed to survive.

Fighting continued in the Mariana Islands of Saipan and Tinian. American victories over these islands facilitated entry into Japan’s internal defense sphere. Saipan, also known as the D-Day of the Pacific, was a turning point in the evolution of the war. The Japanese archipelago was finally within range of the US Air Force B-29 bombers. Some 3,400 American soldiers were killed or reported missing in Saipan and some 10,000 were wounded in combat. Among the deceased was the young Erburu, who lost his life at the age of 22. 90% of the Japanese troops perished during the confrontation. On Tinian, Japanese resistance to the invasion was also fierce. While some 320 American soldiers died and about 1,600 were wounded out of a total of 41,000 marines, the total of the Japanese forces, about 8,000, were annihilated. Added to this was the deaths of some 4,000 Japanese civilians, many as a result of suicides, killed by Japanese soldiers themselves, or as a result of battle. After control of the island some 13,000 Japanese civilians were interned in concentration camps.

Among the Marines of Basque origin identified to date who fought in Saipan and Tinian are the veterans of the Second Division Joseph Quintana Urizar, John Sallaberry Berra, Laurence Urizalqui Zalba, and Joseph Leniz.

Among the Marines of Basque origin identified to date who fought in Saipan and Tinian are the veterans of the Second Division Joseph Quintana Urizar, John Sallaberry Berra, Laurence Urizalqui Zalba, and Joseph Leniz.

Federico Claveria, kneeling by a barbed wire fence, offers candy to a Japanese boy in a field on Tinian. By August 10, 1944, some 13,000 Japanese civilians had been held in internment camps on the island. (US Department of Defense, Marine Corps (USMC) photo, 90935).

Federico was temporarily assigned to the Headquarters of the 24th Aircraft Group of the First Aircraft Wing of the Marine Corps in the Pacific. Two days after Japan’s surrender, Federico requested to be at the handover ceremony on Wake Island that took place on September 4, 1945, as a symbolic gesture towards those fellow Marines who perished or were imprisoned during the Japanese invasion of the island. He was filming the lowering of the Japanese flag when “I look up and I saw a Japanese soldier saluting his flag coming down and tears were running clear down his checks,” Federico recalls. “That touched me. But then, by the same token, a little while later Old Glory was raised and, boy, tears ran down my cheeks, too. So I could understand that the Jap and I were two human beings in the same boat. He was doing his duty; I was doing mine.” [7]. It had been 33 years since he first saw the American flag.

Federico finally returned to the US in January, 1946. In March he married his girlfriend, the Mexican Bertha Alice Ciriza, and in July he was discharged with honors after almost four years of service. He was part of the first generation of correspondents in the history of the Marine Corps. Approximately 430 Marines served in photographic combat roles in the Pacific during the war. None of the original so-called “Denig’s Demons” are still alive. 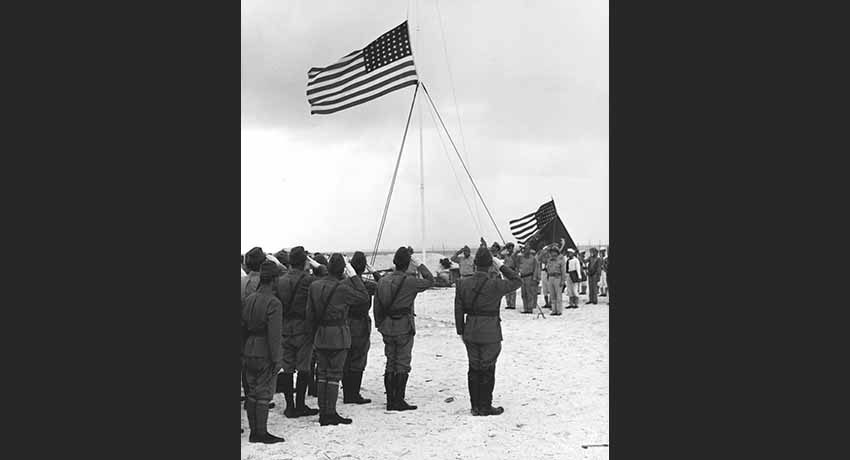 Ceremony for the raising of the American flag over Wake Island on September 4, 1945. This was the first time that the “Stars and Stripes” flew over Wake Island since its capture by the Japanese on December 23, 1941. (Photo by RO Kepler, USMC, NH 96813 of the US Navy, from Wikipedia-Wake Island;).

In December, 1946, Federico and Bertha founded their first tortilla factory under the name of La Tolteca in Santa Barbara, the city where they made their home. They would subsequently open seven more restaurants over the years in Southern California and in the city of Phoenix, Arizona, becoming a prominent Santa Barbara County business family. The family closed the original restaurant in 2006.

Censorship through the world could see and feel what was happening at the front through the photographs and films of war correspondents, whether civilian or military. WWII was followed by many other conflicts in which the tensions between press freedom and military censorship did not ease, reaching a new and surprising goal with the live broadcast of war actions, particularly after 9/11, such as the US invasion of Afghanistan on October 7, 2001, or the subsequent invasion of Iraq in 2003. War was televised as if it were a Hollywood movie.

War correspondents became historians in the trenches who found themselves at the right time and place, making a direct record of life as they reported on the daily events and experiences of soldiers on the front lines. Visual images were added to written testimony, with the power to illustrate an entire generation whose sacrifices could not go unnoticed by a society expectant of the results of their dedication. The images taken by war correspondents such as Federico still retain their historical weight and continue to be used with great profusion 75 years after the events, creating a collective photographic memory of the time and of a generation that achieved the final victory against the totalitarianism of that moment. The very world of Historical Recreation is nourished by the images taken by figures like Federico, endowing them with a new meaning and a symbolic power that they lacked at first.

Even with a clear patriotic propagandist component, they made war something more human, making it visible with its tragic consequences on civilian populations, in the devastation of cities or, for example, by bringing the stories of the soldiers killed in combat to the big screen or the front pages of newspapers… The name of Federico Claveria would become part of the great cast of Basque war correspondents, albeit civilians, who preceded him, such as the historic Cecilia García de Guillarte (Tolosa, Gipuzkoa, 1915-1989), who covered the Northern Front of the Spanish Civil War in 1936; or the mythical Manu Leguineche (Arratzu, Bizkaia, 1941-2014, Madrid); or the more recent Jon Sistiaga (Irun, Gipuzkoa, 1967), Mikel Ayestaran (Beasain, Gipuzkoa, 1967) o Ane Irazabal (Arrasate, Gipuzkoa, 1984). This article serves as a sincere tribute to the men and women war correspondents who continue today literally risking their lives to carry out the fundamental work to inform.

In 1985, the Marine Corps Combat Correspondents Association presented Federico with the “Donald L. Dickson Memorial Award,” created for those who have contributed the most to the association. Federico passed away in 1994 at the age of almost 85 in Santa Barbara and was buried with military honors.

Collaborate with ‘Echoes of two wars, 1936-1945’
If you want to collaborate with “Echoes of two wars” send us an original article on any aspect of WWII or the Civil War and Basque or Navarre participation to the following email: sanchobeurko@gmail.com
Articles selected for publication will receive a signed copy of Combatientes Vascos en la Segunda Guerra Mundial.
Tweet