Félix and Julián Oleaga, two Basque brothers at the front in Europe, from D-Day to Bastogne

Having just turned 19, the young Basque-New Yorker Julián Oleaga Garayo, slight of build, found himself with hundreds of his compatriots literally up to his neck in water – laden with equipment that almost equaled his own weight – starring in one of the most momentous episodes of the Second World War (WWII). D-Day. 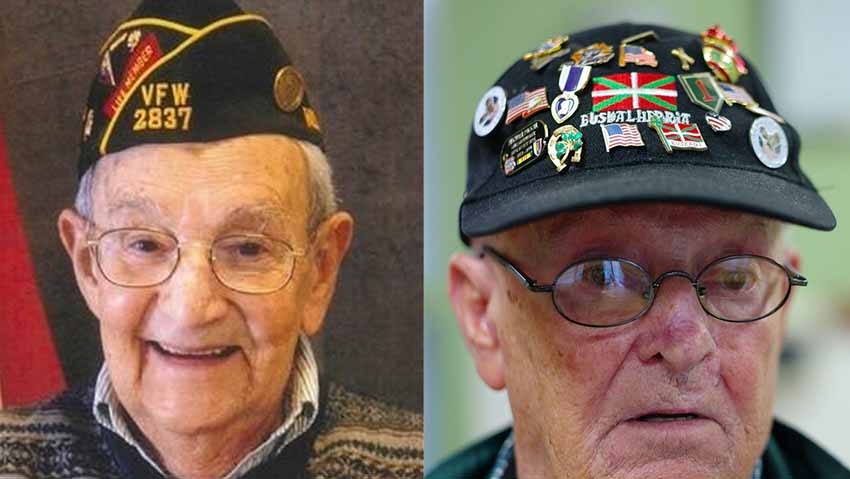 The brothers Félix (left) and Julián Oleaga, proud of their Basque origin, honored the memory of their “brothers in arms” throughout their lives (photo courtesy of the Oleaga family)

[This article originally appeared in Spanish at EuskalKultura.eus and has been translated & published in English at Buber.net]

The Basque New Yorker made his way through the waves, between the bodies of the fallen, the mines and the enemy artillery with the aim of assaulting the “Easy Red” sector of Omaha Beach.

It was his baptism of fire.

Julián and his companions from Company B of the 1st Battalion of the 18th Regiment of the mythical 1st Infantry Division, the “Big Red One,” were part of the second wave during the D-Day invasion of Normandy.

After reaching the beach, they climbed a steep slope and found German troops heavily entrenched in their bunkers. On the 70th anniversary of D-Day, Julián lamented to a New York Times reporter about the high cost in lives it took to drive the Germans back [1]. At 89 years old, he chose, as he confessed to the American television channel CBS, to block the day he saw many of his friends die.

“I want to forget things like that,” he snapped at the interviewer [2].

More than 750 soldiers from the 1st Infantry Division, including Julián, received the Bronze Star for their heroic achievement during the Normandy invasion.

In turn, the 18th Infantry Regiment received two Distinguished Commendations for action in combat from June 6 to 16, 1944. Starting with the capture of Omaha Beach, the 18th would be involved in combat for almost eleven straight months until the end of the war in May, 1945.

Almost a month and a half after Julián’s arrival on the European continent, his older brother Feliciano “Félix” Oleaga Garayo, born in Mundaka (Bizkaia) in 1921, landed on Omaha Beach with his companions from the 44th Armored Infantry Battalion of the 6th Armored Division, the “Super Sixth.”

During the two months that the Oleaga brothers overlapped in the European Theater of Operations, they encountered lethal German resistance in Normandy as well as in northern France and in the Rhineland during their military advance.

We do not know if they knew of the existence of one another during the three military campaigns in which they took part, although without any doubt the Oleaga occupy a prominent place among the hundreds of “Fighting Basques” of WWII.

Both Félix and Julián had very distinguished military careers, as they were continuously in combat against the Wehrmacht for months. Furthermore, Julián joins the almost fifty veterans of Basque origin who participated in D-Day in Normandy identified to date.

But since every story has a beginning, let’s start there.

The boys’ father was the merchant sailor Julián Oleaga Bajineta, born in Mundaka in 1894.

He arrived at the Port of New York for the first time in 1912, establishing his home and that of his future wife, Ciriaca Garayo Acha, and their children in the city of skyscrapers.

In 1925 she gave birth to Julián, on the Lower Eastside of Manhattan.

Two siblings of Julián Sr., Margarita and Gregorio, also emigrated to New York in 1918 and 1920, respectively. 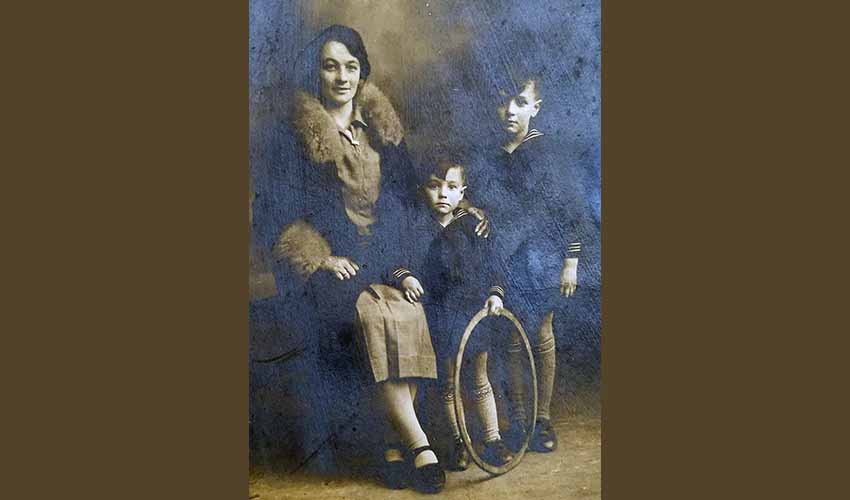 Ciriaca Garayo Acha poses with her children Julián and Félix Oleaga at a photographic studio in Bilbao after her last stay in New York
(photo courtesy of the Oleaga family).

Ciriaca Garayo Acha poses with her children Julián and Félix Oleaga at a photographic studio in Bilbao after her last stay in New York (photo courtesy of the Oleaga family).

Diagnosed with tuberculosis, Ciriaca returned with her children to Mundaka.

Faced with the impossibility of the father taking care of the children as he was working at sea most of the time, their grandparents and aunts took on this responsibility, after the early death of their mother in 1933.

Félix and Julián grew up in the family’s farmhouse in the aforementioned Biscayan coastal town until they were claimed by their father in 1938.

Félix was 16 years old and Julián 13 when they returned to New York, going to live, at first, with their aunt Margarita. They began a new life in a city alien to them.

The brothers attended Mount St. Charles Academy, a Catholic high school in Woonsocket, Rhode Island, from which they graduated with honors.

Meanwhile, their father had gotten a job on a tugboat for the Standard Oil Company in New York Harbor itself.

One year after the United States declared war on Japan and Germany, Félix, 20 years old, enlisted in the Army in New York City.

A year later, in 1943, his little brother would follow in his footsteps.

The brothers Julián (standing) and Félix pose with their father, Julián Oleaga Bajineta, in their Army uniform (photo courtesy of the Oleaga family).

The brothers Julián (standing) and Félix pose with their father, Julián Oleaga Bajineta, in their Army uniform (photo courtesy of the Oleaga family).

Returning our story back to Europe, in 1944 to be exact, Julián and his company crossed France and Belgium and entered Germany, until a projectile exploded above him.

The war was over for the D-Day veteran.

Julián was wounded outside the city of Aachen on September 18, 1944, at the beginning of the Battle of Hürtgen Forest, for which he received the Purple Heart.

According to his son, Julian Oleaga Volponi, “my father lost the calf of his left leg and had artillery shrapnel in his back for the rest of his life with the consequent degree of disability.”

Admitted to a field hospital, he was later evacuated to another hospital in Scotland and from there to the US in February 1945.

In November of that same year, Julián was honorably discharged with the rank of first class private, being awarded the Medal of Good Conduct, the Combat Infantry Badge, and the European-African-Middle East Campaign Ribbon.

His brother Félix participated as a squad leader in the military campaigns of Normandy, Northern France, the Rhineland, and the Ardennes-Alsace, where his armored infantry battalion played an important role during the capture of the Belgian city of Bastogne in December, 1944, during very harsh weather conditions.

In fact, in January, 1945, Félix was admitted to the hospital for the beginning stages of frostbite of the toes of one of his feet.

On February 8, 1945, he was wounded by artillery in the leg, possibly during an incursion through the “Siegfried Line,” for which he received a Purple Heart.

His luck had also run out.

He was repatriated to the United States in August, 1945, being discharged with honors with the rank of sergeant in September. He was awarded the Medal of Good Conduct, the Combat Infantry Badge, and the Middle East-European-African Campaign Ribbon. 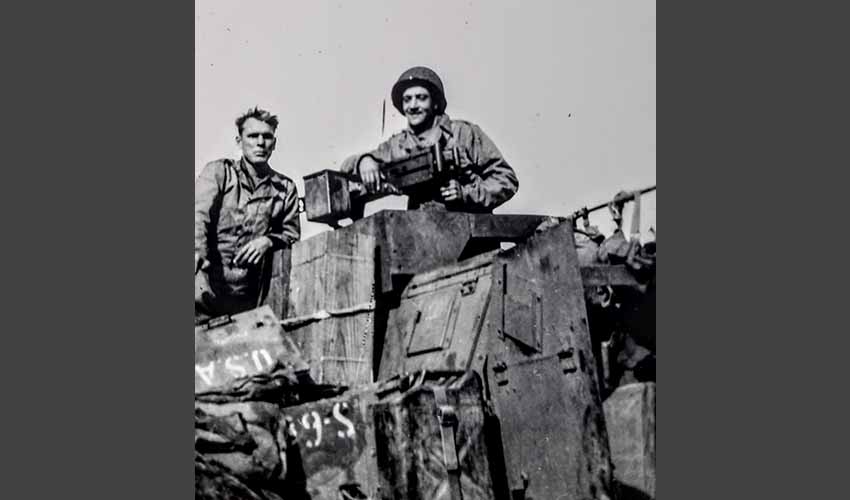 Félix Oleaga on his half-track with an unidentified colleague from his unit (photo courtesy of the Oleaga family).

Félix Oleaga on his half-track with an unidentified colleague from his unit (photo courtesy of the Oleaga family).

After their return to the United States, the brothers resumed their civilian lives like millions of their compatriots.

In 1947, Félix married the daughter of Biscayan emigrants born in New York, his fellow veteran Rosa Torrontegui Olondo of the US Cadet Nurse Corps, to whom we will dedicate a well-deserved article in the near future.

“We were raised as proud Basque-Americans,” said Patricia Oleaga Torrontegui, the daughter of Félix and Rosa.

Félix worked as a translator and business consultant for the New York State Department of Commerce.

Julián worked until his retirement for the New York City Parks Department.

We be remiss if we didn’t tell of Julián’s heroic act in the winter of 1960. He rescued three children between the ages of 4 and 6 from an icy pond near his home on Long Island, into which they had accidentally fallen. One of them regrettably later passed away. Without him, none of the children would have survived. It was an act that speaks volumes of Julián’s humanity.

“My father loved going back to his hometown, Mundaka. He loved hanging out with his aunts, uncles, old friends and cousins […] He loved to socialize, have a drink with family and friends and talk about the ‘old days’,” his son, Julian Oleaga Volponi, told us. “Our father gave us many gifts, including the gift of love and family […] My father was so proud to be Basque. My mother [Marie Theresa Volponi] was Italian, but they always told us that we were Basque-Italian-Americans,” added Julian Jr. 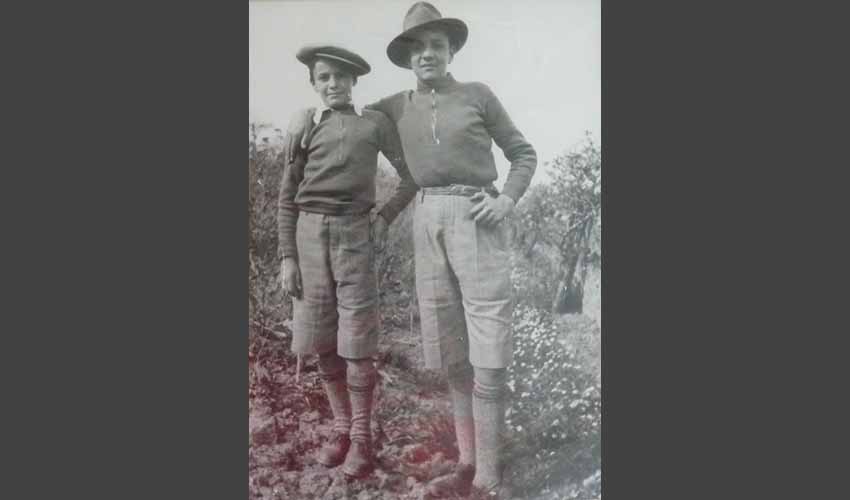 Orphaned by a mother at an early age and separated from their father for years, Félix and Julián, even as teenagers, knew how to make their way into a new world, leaving behind the only life they had ever known.

As soon as they had the opportunity, they made Mundaka a second home to which they would often return to relive the memories, the culture, and the language of their childhood.

They both spoke Euskara and were deeply proud of being Basque, making it compatible with their love for the country that welcomed them and gave them new opportunities, and which they defended in the trenches of Europe during the last world war.

These are the stories of our “Fighting Basques.”

Collaborate with ‘Echoes of two wars, 1936-1945’
If you want to collaborate with “Echoes of two wars” send us an original article on any aspect of WWII or the Civil War and Basque or Navarre participation to the following email: sanchobeurko@gmail.com
Articles selected for publication will receive a signed copy of Combatientes Vascos en la Segunda Guerra Mundial.
Tweet

“Echoes of two wars, 1936-1945” aims to disseminate the stories of those Basques and Navarrese who participated in two of the warfare events that defined the future of much of the 20th century. With this blog, the intention of the Sancho de Beurko Association is to rescue from anonymity the thousands of people who constitute the backbone of the historical memory of the Basque and Navarre communities, on both sides of the Pyrenees, and their diasporas of emigrants and descendants, with a primary emphasis on the United States, during the period from 1936 to 1945.

Guillermo Tabernilla is a researcher and founder of the Sancho de Beurko Association, a non-profit organization that studies the history of the Basques and Navarrese from both sides of the Pyrenees in the Spanish Civil War and in World War II. He is currently their secretary and community manager. He is also editor of the digital magazine Saibigain. Between 2008 and 2016 he directed the catalog of the “Iron Belt” for the Heritage Directorate of the Basque Government and is, together with Pedro J. Oiarzabal, principal investigator of the Fighting Basques Project, a memory project on the Basques and Navarrese in the Second World War in collaboration with the federation of Basque Organizations of North America.

Pedro J. Oiarzabal is a Doctor in Political Science-Basque Studies, granted by the University of Nevada, Reno (USA). For two decades, his work has focused on research and consulting on public policies (citizenship abroad and return), diasporas and new technologies, and social and historical memory (oral history, migration and exile), with special emphasis on the Basque case. He is the author of more than twenty publications. He has authored the blog “Basque Identity 2.0” by EITB and “Diaspora Bizia” by EuskalKultura.eus. On Twitter @Oiarzabal.

Josu M. Aguirregabiria is a researcher and founder of the Sancho de Beurko Association and is currently its president. A specialist in the Civil War in Álava, he is the author of several publications related to this topic, among which “La batalla de Villarreal de Álava” (2015) y “Seis días de guerra en el frente de Álava. Comienza la ofensiva de Mola” (2018) stand out.