Veterans Day: an opportunity for Basques in the US to collaborate in the “Fighting Basques” research project 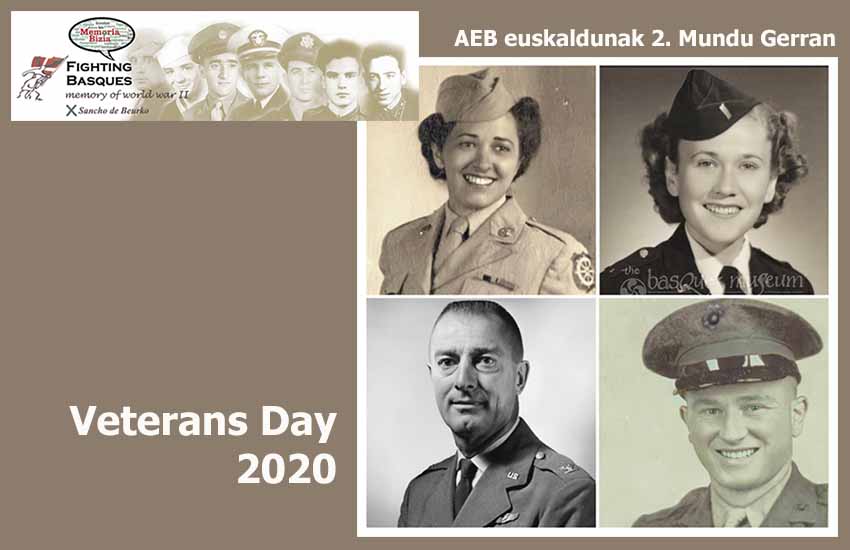 You can contribute to the research by providing names and information that you may have on a family member, or acquaintance who served during WWII

Reno, Nevada, USA . Today is Veterans Day in the United States and Memoria Bizia and the Fighting Basques research project on the participation of Basques in the US military forces during World War II are commemorating the event by inviting the US Basque community to join in the effort and collaborate in order to continue providing data, photos, information and material on the contribution of men and women of Basque origin to that war effort.

This news was also featured in a special Veterans Day edition of NABO’s Astero available here..

Under the auspices of NABO (North American Federation of Basque entities), the Sancho de Beurko Elkartea Association has in the last five years put forth a large effort to rescue information and conduct research that has made identifying more than a thousand Basques who served in the United States Armed Forces during World War II possible.

The project led by historians Pedro J. Oiarzabal and Guillermo Tabernilla, has identified some 1,300 Basque Americans (up to the second generation) in the US Armed Forces during that period. To date they have completed more than 900 biographies. The conclusion of this work could lead to the creation of “The National Basque World War II Memorial” that serves as an archive and memory of this important contribution by our community.

Wherever you are, if a relative or acquaintance of yours participated in any way from the US in World War II, you can preserve their memory and collaborate with the project by identifying them and providing the data (as much as you may have, it does not matter) about him or her. To do so, email sanchobeurko@gmail.com. With our thanks.