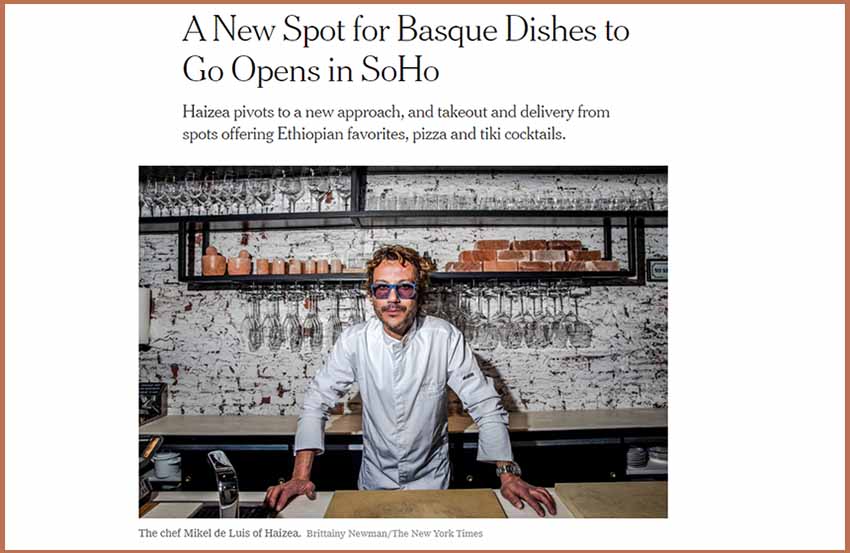 New York, NY, USA. This is not an ordinary opening.  After the obligatory New York restaurant closures because of the Coronavirus, last Wednesday, the Haizea Restaurant by Chef Mikel de Luis, has opened its doors in Soho, after a two-month postponement due to COVID-19.  Now the wait is over, and it is open albeit only for takeout, offering a special menu available Wednesdays through Sundays, with pickup hours from 11AM until 6PM daily. Orders can be placed by phone +1 646 476 2261 or you can pre-order using this link. Just prior to its opening, The New York Times gave it a luxurious gift, publishing an article presenting Haizea..

Before reproducing the NYT's mention, we should say that Mikel de Luis originally from Bilbao has spent years in the Untied States, most recently in New York moving with calculated and accurate steps in the difficult world of gastronomy with projects in catering, import, and distribution of food from Euskadi and Spain, developing projects as chef and businessman with his flagship aMona events, named after his grandmother (Amona means grandma in Basque), where a dozen ventures converge, including, for example, his own line of sauces (Amona Salsas). The Haizea Restaurant now joins the family.

"What does it take to open a restaurant in the midst of a pandemic? Mikel de Luis, the chef and the owner of a tiny, contemporary Basque-style spot whose opening was postponed by two months, will now test the waters, going takeout-only. “It’s been frustrating not to open,” he said, adding, “It’s time to try; people want something new.” Most of his dishes were to be small plates, but for his takeout menu, he is serving some larger dishes like roast suckling pig, duck and mushroom fideos (thin noodles), fisherman’s rice with chicken and seafood, and a substantial sandwich of Iberico ham with Roncal cheese. A mentee of Martin Berasategui, for whom he cooked at the Ritz-Carlton in the Canary Islands, Mr. De Luis is a native of Bilbao, in the Basque region of Spain. (The restaurant’s name means “wave”* in Basque.) He has worked in Barcelona; Homer, Alaska; and, more recently, at Nana in Dallas, with the chef Anthony Bombaci. When it can fully open, Haizea will seat only around 10 instead of about 20 to facilitate social distancing.”

(*) apologies for correcting my colleague, but Haizea means “wind,” not “wave”