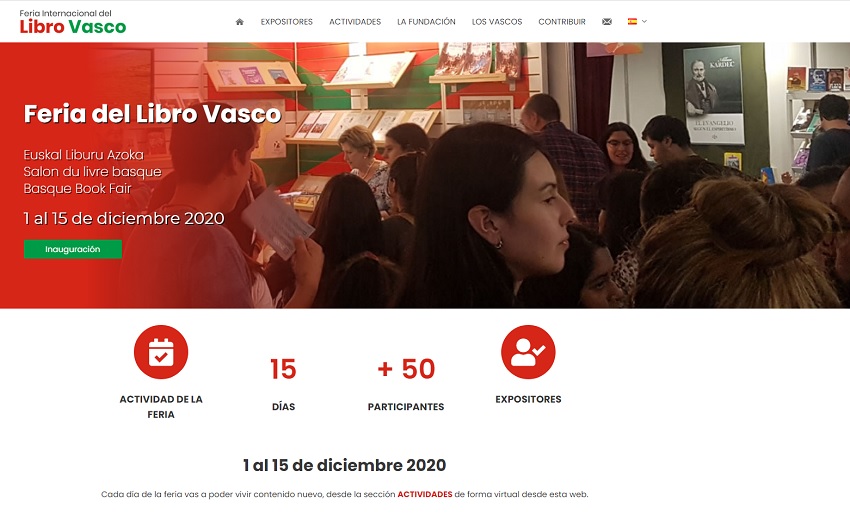 Image of the International Basque Book Fair’s website. It is available in Spanish, Basque, French and English

Buenos Aires, Argentina. The Fair’s website can be visited beginning tomorrow, December 1sth through December 15th. The aim is to “bring those interested in Basque issues closer to the sites of publishers or specialized bookstores where they can see what material they offer and purchase it.” “The ‘Exhibitors,” section includes 15 links to online stores, including that of the foundation itself,” Foundation sources told EuskalKultura.eus.

The Foundation also announced two kinds of cultural activities, those accessible through “Activities,” as well as a series of interviews with members of the Foundation that have published books.  Among these interviews are María Cristina Berçaitz, Carlos Heguy, Mauricio Goyenechea, Jorge Beramendi and Enrique Aramburu.  There is also a selection of talks that are usually offered as part of their normal annual program, in this case, they are accompanied by slides.

As part of the English content, the Juan de Garay Foundation announced that its member, Christopher Carpenter, has prepared an exhibit about Basques in the American Revolution; “A very interesting work with data obtained from historic sources that normally are now shared in the United States and that constitute something new for the American public,” Jorge Beramendi told.  The date of Carpenter’s exhibit is TBD.

Available in the “Foundation” section is a summary of the Los Vascos en la Argentina book.

All cited contents will be available tomorrow here: https://feriadellibrovasco.com.

The “Inauguration,” section will also be available tomorrow with videos from the Foundation’s president, Dr. Diego María Ibarbia, and the Direcotr of the Fair’s organization Jorge Beramendi, presenting the event.