It has been 50 years since the Burgos Trials, whose tide of protest also included Basque clubs and communities around the world 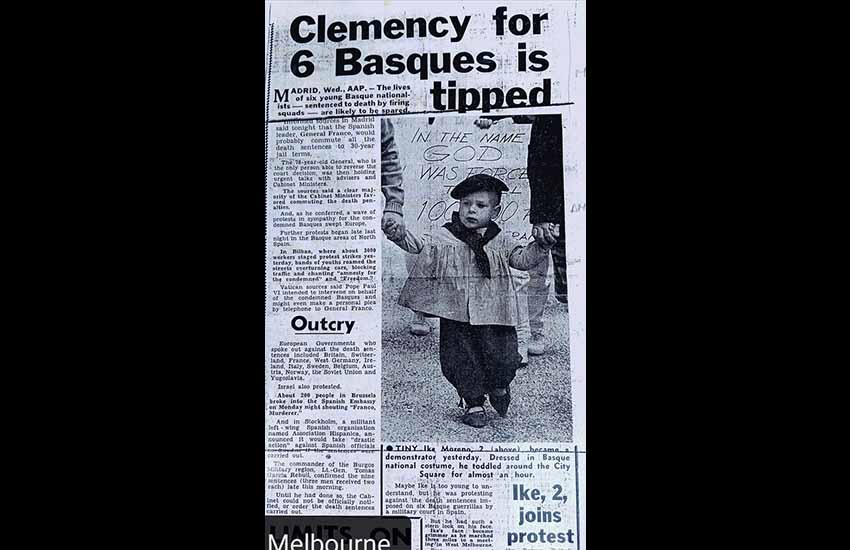 Along with many others, members of Basque clubs and communities protested in Australia, the United States, Latin America, Europe…

Donostia-San Sebastián. It took place in 1970, 50 years ago this week.  In the martial court known as the Burgos Process, the Franco regime judged sixteen Basques in the general Captaincy of Burgos for belonging to ETA.  Six of them would be sentenced to death (three to double death sentences) with sentences totaling more than 500 years in prison.  However, the trial did not go well for the Fracoist government, with their goal of exemplary and propaganda.  The international pressure obliged the death sentences to be commuted and the trial itself ended up being a complaint against the Franco regime.

The Basque-Australian, Joseba Moreno Ugalde sent us this photo that illustrates the note. Protests against the regime took place all over the world, an example of which in Melbourne.  Joseba's uncle, José Antonio Ugalde, at the time president of the local Gure Txoko Basque Club, and other Basques, organized and took to the streets.  Johnny Ugalde recalls the organized trip “to Canberra to protest against the Burgos Process, with a hundred people, and in Melbourne the demonstrations wand protests; we went out many times so that the opinion of the Basques appeared in the Australian press, and television,” he said.

The image reflected in the photo shows Iker Moreno Ugalde in Melbourne’s daily newspaper The Sun, explaining, “at the age of two (the child) became a protester, wearing the Basque national costume, for an hour in Melbourne’s town square.” Information about this and many other protests was heard every night in thousands and thousands of Basque homes clandestinely, through the broadcasts of “Radio Paris,” in a country that did not enjoy freedom of the press at the time.