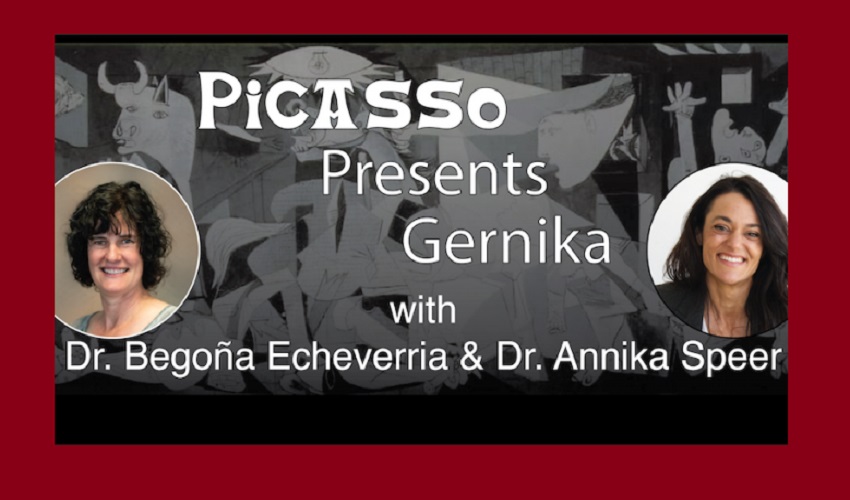 Riverside, California, USA. This coming Saturday, two days before the 84th anniversary of the Bombing of Gernika, Picasso Presents Gernika will debut on YouTube.  The docudrama addresses the consequences of the bombing that took place on April 26, 1937 in this Basque town, and specifically addresses the experiences of children separated from their families and taken to other countries, as well as the different ways the event marked their destinies.  The script was written by Begoña Echeverria, professor at the University of California, Riverside, the institution that is hosting the broadcast.

Our colleague Blas Uberuaga publishes about this an interesting interview on Buber.eus, which we recommend reading.

When asked about the origin of the script, Echeverria told Buber’s Basque Page, “While living in Donostia, I learned that my neighbor’s father and a brother of his father were among the children evacuated to England after the bombings.  But, the mother of those children only asked for the brother to come back, not my friend’s father, and he never knew why.  That’s all I know about that story, which inspired Picasso Presents Gernika.”

With interesting changes to the “original plot,” for example instead of two brothers being a brother and a sister, the script became a docudrama that significantly intertwines “material and documentation from primary sources with imaginative fiction.” In this process, Echeverria collaborated with Dr. Annika Speer, Professor in the Department of Theater, Film and Digital Production at UC Riverside, where the Basque-Californian sociologist teaches.

During 2021, besides debuting on April 24th at 7pm PST (see link here) Echeverria and Speer will also present Picasso Presents Picasso at the Eusko Etxea of New York on June 5th, “84 years after the date that Picasso completed Guernica.” In addition, Speer will direct a theatrical lecture at the Santa Monica Playhouse on Saturday, November 20th.  But they could be open to presenting their work in other Basque clubs, civic centers or cultural institutions.

Born in California, Dr. Begoña Echeverria, is a fluent Basque speaker, author among other works of The Hammer of Witches, a novel that takes place in Baztan, the Navarrese valley where her family is from.  She is also one of the voices of NOKA, a trio formed of three Basque-American women that sing a repertoire in Basque.