Leading up to the 84th Anniversary of the Bombing, listen to this song by an Argentine paying tribute to “The Oak of Guernica” 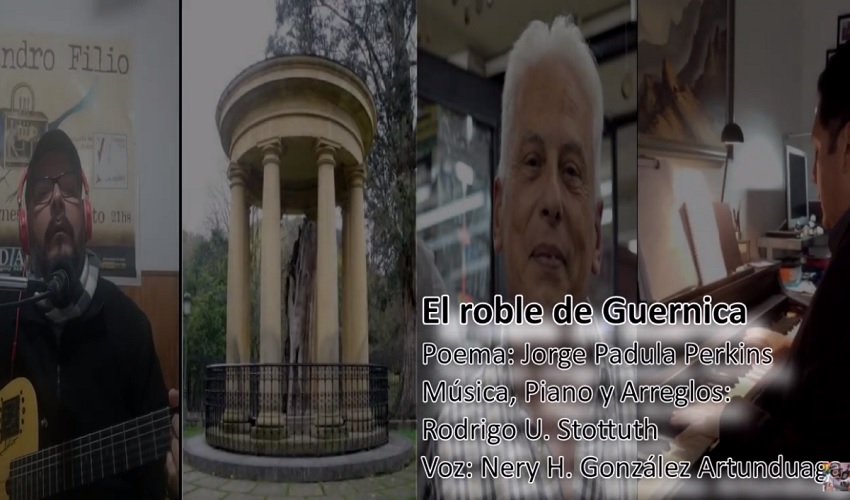 “The Oak of Guernica,” tribute song on the 84th anniversary

Buenos Aires, Argentina. Next Monday, April 26th, marks 84 years since German and Italian plans allied with General Franco bombed the Basque town of Gernika and massacred its civil population. Overcoming the lies for the Franco regime and thanks in large part to Pablo Picasso and journalists like George L. Steer, the attach and its significance would eventually transcend all borders and today is remembered every month of April particularly in the Basque Country, but also throughout the Basque Diaspora and other places in the world becoming a symbol to denounce war and violence.

But besides the events organized in the Basque Country and the Diaspora, a different video with the tribute song “El Roble de Guernica” (The Oak of Guernica) has been released from Argentina. With lyrics by Jorge Padula Perkins and music by Rodrigo U. Stottuth, the song was performed by Nery H. González Artunduaga, an artist of Bolivian origin who currently resides in Río Cuarto, Argentina.

Padula Perkins summarizes with these words the vision expressed in the video: “The oak was witness to that tragic historical moment and then consolidated its ancestral symbolic value for the Basque people as an emblem of freedom and peace.”

Even if the author doesn’t have a direct link to the community, the tribute song to the Oak is not the only work by Padula Perkins with a Basque theme.  In fact, the Argentine journalist, writer and poet also composed “Alma del Euskera,” (Soul of the Basque) a piece that was put to music by Alfredo Figueras.

In his own words, “We wrote the song ‘Alma del Euskera’ in 2018, especially to present at the Eusko Kultura Etxea in Buenos Aires.  This was dedicated to Basque immigrants in Argentina, their descendants all over the Basque Diaspora around the world,” he explained.