The Diaspora at the Basque Parliament: listen to the welcome and response by Arantxa Anitua, Unai Lauzirika, and Jean Flesher (videos – II) 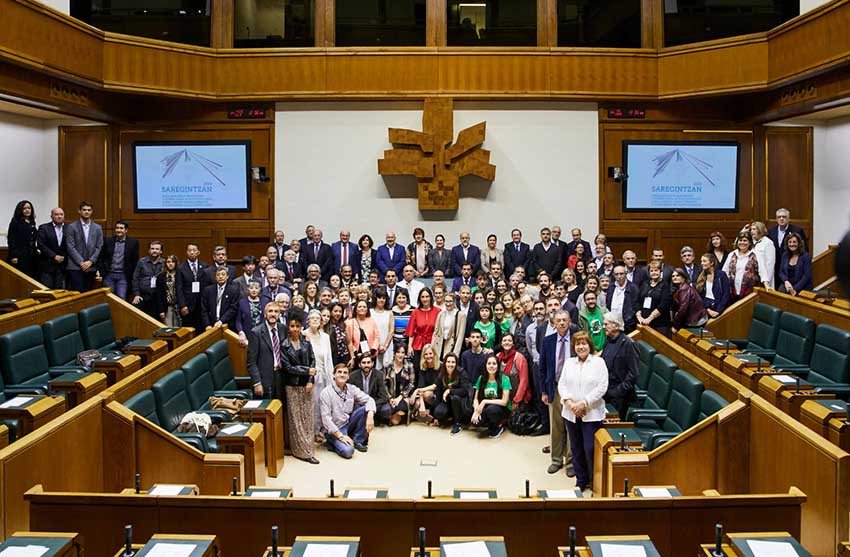 Group photo of the visit to the Basque Parliament by participants in the 7th World Congress of Basque Collectivities, 2019

Vitoria-Gasteiz. The World Congress came to a close on Friday, October 4th with addresses by Lehendkari Urkullu at an event first thing in the morning at the Lehendakaritza (Basque President's Government Offices).  From there, attendees made their way to the Parliament where they were officially welcomed by its president, Bakartxo Tejeria and members of the Parliament Board.  At the event, the Basque legislature and the executive had words of welcome and recognition towards the diaspora and its representatives.

After President Tejeria’s welcome, other elected officials spoke from the Basque collectivities in the world: Arantxa Anitua from Argentina, representing South America; Unai Lauzirika from Germany representing Europe, Asia and Oceania, and Jean Flesher from the US, representing the US, Canada and Mexico.  In addition to the representatives of the Diaspora, and together with members of the current General Secretariat for Foreign Action, and the Directorate for the Basque Community Abroad, former secretary generals, and directors were also present.

All of them were participating in the tribute to Law 8/1994 approved on May 27th as part of its 25th anniversary. This law provided the basis and architecture from which the entire relationship between the Basque Government and Basque collectivities abroad has been built, making possible, among other things, this one and six previous World Congresses that have been celebrated. Here are the speeches:

Arantxa Anitua, representative of the Basque Collectivities in South America

Jean Flesher, representatives of the Basque Collectivities in North America