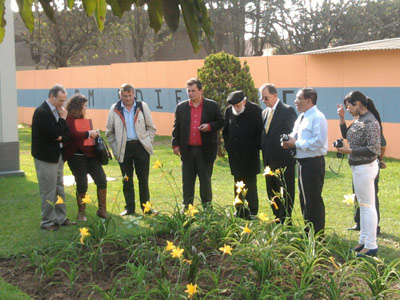 On November 6 commemorative events were celebrated in Lima to mark the four hundredth anniversary of the founding of the Brotherhood of the Virgin of Arantzazu, that has been revived by a group of euskaltzales there after years in oblivion. The anniversary events served to publicize the extensive process of research and retrieval of historical documents of the brotherhood which has already begun to bear fruit. The revived brotherhood is working to digitize these documents and has already reissued texts of the Novena to the Virgin of Arantzazu in Lima in Basque and the statutes of the Brotherhood originally published for the last time in 1851.

Lima, Peru.   The renewed Brotherhood of the Virgin of Arantzazu in Lima celebrated the four hundredth anniversary of its foundation with a conference and presentation of a book on the history of the entity.  The events were supported by a group Basque-Peruvian, inspired by the work of journalist Francisco Igartua (founder of Oiga magazine). They decided to rescue this important historic entity from oblivion.

The commemorative acts included the celebration of a seminar on the history of the Brotherhood of our Lady of Arantzazu in Lima and the Basque presence in Peru.   Additionally, the work done by the entity to rescue and bring to light the historic archives that were edited into a book coordinated by Oscar Alvarez Gila historian from the University of the Basque Country was also presented.

Basque Peruvian John Bazan Aguilar, one of the supporters of the initiative, told EuskalKultura.com that this is “the first step in rescuing the legacy that our Basque ancestors left us in Lima.”  The entity is now working on digitizing and publishing the archival documents of the Brotherhood of Our Lady of Arantzazu in the Peruvian capital city.

[John Bazan Aguilar, one of the supporters of the recuperation of the Brotherhood, being interviewed by the media during the planting of a sapling from the Tree of Gernika at the University San Martin of Lima (photo CVAL)]

“Our first step was to locate document sources.  These were spread out and lacking any connection one to another.  After years of work we were able to access them thanks to the help of prestigious families descended from the ancient brethren.  Later, we were able to access other private collections, that expanded the digitized material,” he explained.

The research process in the archives has led to the recovery “of 1,632 hectares of land that belonged to a mercantile society of which the Brotherhood was co-owner until 1865.  This marks a historical fact in Lima and I think in the Basque Country,” said Bazan.  The next step of the Brotherhood is to acquire a place in the Historic Center in Lima, where the Brotherhood was run, and to restore and convert it into the home for the digitized archives, open to all researchers worldwide.

The commemorative acts ended with the planting of a sapling from the Tree of Gernika donated by the Euzko Etxea of Santiago, Chile on the University of San Martin of Lima campus, a land that was once owned by the Brotherhood.  The event was attended by officials, members of the Brotherhood, historians and conference attendees.