The Athletic Peña or fan club in Caracas is one of many in the world: interview with its president, Iker Ruiz de Sabando 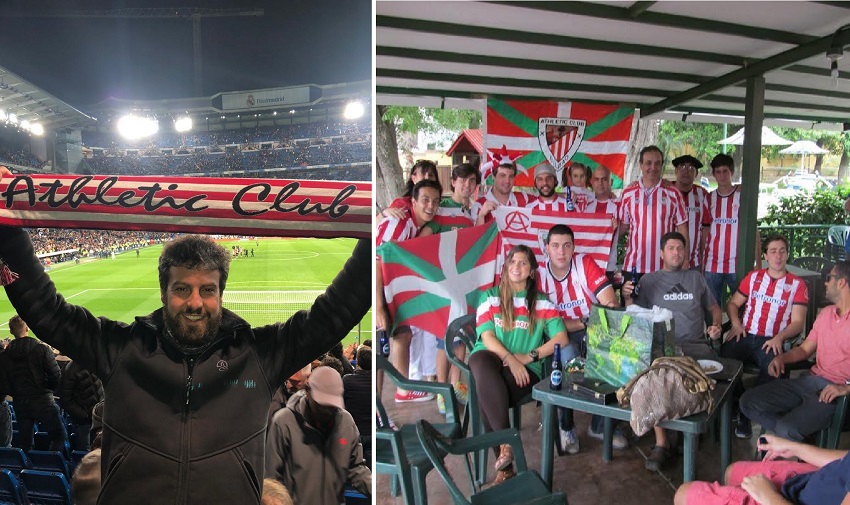 Iker Ruiz, at the stadium along with the Athletic Peña in Caracas

Caracas, Venezuela. We still don’t know when they will play, or if they will have an audience when they do so, or if it will be closed to the public, but what is sure is that fans are anxious for the final match of the Copa del Rey, that pitches two Basque soccer teams against each other in 2020: Real Sociedad from Donostia-San Sebastian, and Athletic from Bilbao.  We talked to Iker Ruiz de Sabando, president of the Athletic of the Athletic Peña at the Eusko Etxea in Caracas as well as the club’s sports director about this and other topics.

Iker is the descendant of Basques on both his mother’s and father’s side and has been linked to the Basque club “forever.”  His father, Eduardo Ruiz de Sabando was in fact the first president of the Peña, a role that he now plays with much pride and “zurigorri,” pride.

What are the ins and outs of the Athletic Peña in Caracas? Iker tells us in this interview with our colleague Sabrina Otegui. Mila esker, lagun, and without slighting anyone ... Aupa Athletic!!

[Interview by EuskalKultura.eus with Iker Ruiz, president of the Athletic Peña in Caracas]

Athletic Peñas around the world

There are more than 400 official Athletic Peñas, half of which are in Euskal Herria, with the rest in the Diaspora, in Spain as well as the rest of the world that are included here:

The Venezuelan Peña works along with others around the world, and has been in contact, for example with those in Mexico, Cuba and Italy.  As well as with those in Navarre, La Rioja and some in Aragon during the trip for the Final of the Copa in 2009.