Regional meeting of Basque clubs in Europe, Asia and Oceania this weekend at Eskual Etxea in Paris 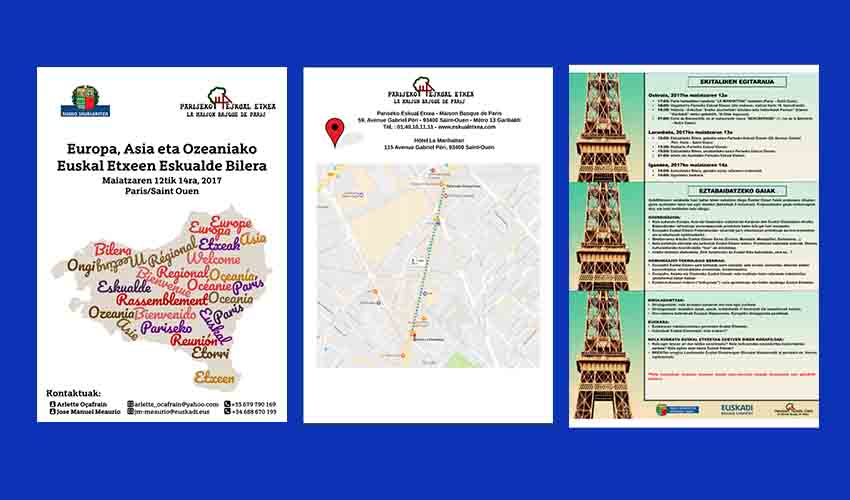 Poster and program for the Regional Meeting of Basque Clubs in Europe, Asia and Oceania at the Paris Eskual Etxea

Representatives will arrive today in Paris where a reception will be held this afternoon at Eskual Etxea at 6pm, kicking off the events that will conclude on Sunday at noon.  The meeting was organized by the Basque Government, in collaboration with the local Basque club, and is in response to the request by the World Congress of Basque Collectivities to celebrate regional meetings between congresses.  The last regional meeting of Basque clubs in Europe, Asia and Oceania was four years ago in Barcelona.

Paris, France.  Some twenty delegates from Basque clubs in Europe, Asia, and Oceania will meet this weekend, May 12-14th in Paris.  The event will take place at the Pariseko Eskual Etxea headquarters in St. Ouen.  This is in response to a request made by the World Congress of Basque Collectivities that regional meetings be held in between World Congresses, or every four years, as clubs from these same areas of the world held four years ago in Barcelona.  In light of this, it was decided to divide clubs around the world into three regions: Europe, Asia and Oceania (23 clubs); North America (Canada, Mexico and the US, 48 clubs); and South America, Central America and the Caribbean (119 clubs).

The Basque Government, along with the hosting Basque club in Paris, are in charge of the organization and coordination of the event.  With Gorka Alvarez Aranburu being named the new Director of Basque Communities Abroad in January, the gathering will also serve as a mutual opportunity for face-to-face meetings in order to get to know firtshand concerns, problems and proposals and incorporate the information to the big picure of the Diaspora, to later adapt and complete the Government's plans in this new legislature.

-10:00 Regional meeting at the clubhouse, and closing remarks
-14:00 Farewell lunch

The regional meetings for North America; and for South America, Central America and the Caribbean region are planned for next year.