Presentation in Mexico of “Entrañas” by Danele Sarriugarte, and then a Rally of Basque Literature with Eider Rodriguez 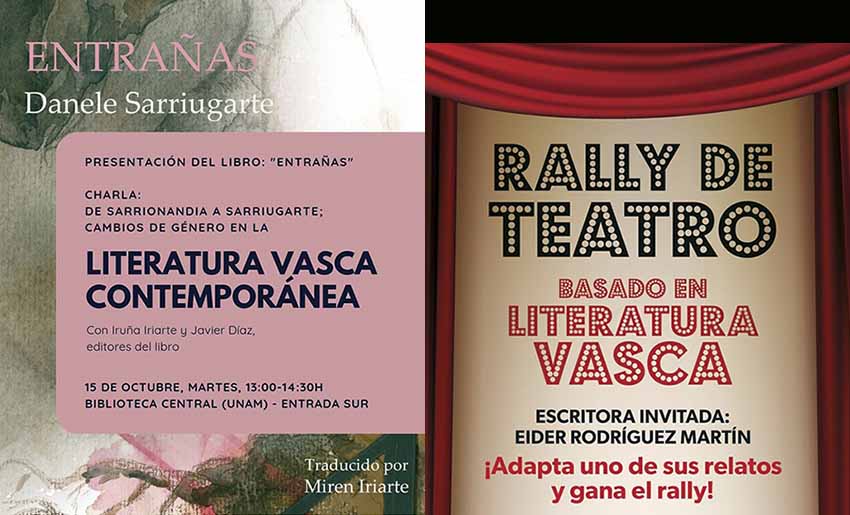 Mexico City, Mexico. The Euskaraldia.mx initiative supports the knowledge of the Basque language and culture in Mexico. Haizea Elizondo Gorroño lecturer at UNAM and the Etxepare Basque institute has announced two activities for today and in the coming days and weeks.  The first of these is a presentation on Tuesday of the novel Entrañas (Bowels) by Danele Sarriugarte at an event where editors of the work, Iruña Iriarte and Javier Diaz, will give a presentation entitled, “From Sarrionandia to Sarriugarte, Gender Changes in Contemporary Basque Literature.”

In addition, during the time period from now till the celebration of International Euskera Day (ENE) December 3rd, there will also be a “Theater Rally Based on Basque Literature.” Anyone interested may participate by writing here lenguayculturavasca@enallt.unam.mx, to receive a text written by Eider Rodriguez that participants must adapt and put on stage and record on video, in 15 minutes or less.

The video must be mailed by November 7th at 11pm.  In the first round of judging, six works will be chosen (November 20th)  The six works will be presented publicly, before the jury on November 26th and the next day the three finalists will be announced.  Finally, as part of the ENE festivities on December 3rd, there will be an awards ceremony for the top three videos, with writer, Eider Rodriguez attending.  She will be coming to Mexico to participate in the International Book fair in Guadalajara.  Awards including 9.000 mx, 6.000 mx and 3.000 mx awarded to first, second and third places respectively.

The “Theater Rally Based on Basque Literature,” is a proposal of the Basque Language and Culture Lecturer at the National School of Languages, Linguistics and Translation (ENALLT-UNAM) and the Etxepare Basque Institute in collaboration with the College of Dramatic Literature and Theater at the College of Philosophy and Humanities and the Central Library. The objectives of this initiative hopes to promote Basque literature in Mexico as well as scenic creation, and to support the creation of performed literature.