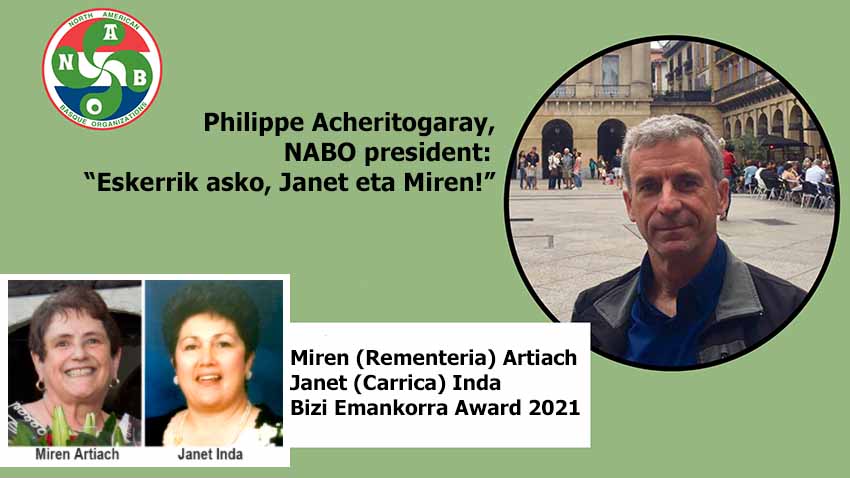 San Francisco, California, USA. They have been and are well-known and appreciated individuals in their respective cities and Basque communities for an entire life of work and selfless effort in favor of the Basque community, at both the local and national levels, which is why they so deserve the Bizi Emankorra, the N.A.B.O. lifetime achievement award.  The nominations were presented last Saturday, March 13th at the N.A.B.O. winter meeting and were approved unanimously to recognize Miren (Rementeria) Artiach from Boise and Janet (Carrica) Inda from Reno. Miren was the first N.A.B.O. secretary and Janet had served as the federation’s secretary, treasurer, president and vice-president.

Miren Edurne (Rementeria) Artiach was born in Boise to immigrant parents with Basque being her first language.  Throughout her life she has been a member and active participant in all the initiatives around the Basque language, culture and Basque commitment that have emerged in Boise, from the Euskal Etxea, to Basque classes, also including the choir, Music Camp (Udaleku), the Museum, Basque Studies, solidarity with the Basque Country and Oinkari among many others.  For decades she was Secretary of State, Pete Cenarrusa’s Chief of Staff and Deputy and the Basques always had in her, as in Pete, an extraordinary ally in the Idaho Capitol.  She married Jose Mari Artiach from Muxika, and was widowed in 2019, the mother of Aitor and Andoni.  The name Bizi Emankorra (Fruitful Life) acquires its full meaning with Miren who was also the recipient of Euzkaldunak’s Legacy Award in 2018.

Change of city, state and context, to highlight the contributions of Janet Inda, we move from Idaho to Nevada.  Janet (Carrica) Inda, the daughter of a sheepherder and rancher who emigrated fro Banka (Behe Nafarroa) and of a Danish mother. Born in Fallon, Nevada, in 1945 she has lived in Eureka, but finally settled in Reno.  As in the case of Miren Artiach, her husband, Michel (Mike) Inda, also from Behe Nafarroa, is originally from the Basque Country, and also in her case the feeling and commitment to all things Basque lives on in the family with her daughter, Denise and son-in-law Paul and granddaughter Maitane Miren.  Janet addresses and explains her youthful period as the daughter of a Basque sheepherder in this interview conducted by the University of Nevada, Reno in 1982. Like Miren, she was a pioneer in the beginnings of N.A.B.O. promoting initiatives such as Music Camp (Udaleku).  Within the federation she also served as the delegate of the Reno Zazpiak Bat Basque Club and was elected and held all of the officer positions in the federation, secretary, treasurer, president and vice-president.

N.A.B.O. President, Philippe Acheritogaray proposed these two individuals to their respective communities in Boise and Reno with the Cenarrusa Foundation nominating Miren, and the Reno Zazpiak Bat Basque Club nominating Janet.  These nominations were passed very enthusiastically and unanimously at the meeting. The award presentations themselves will be determined by each community.  Zorionak biei!