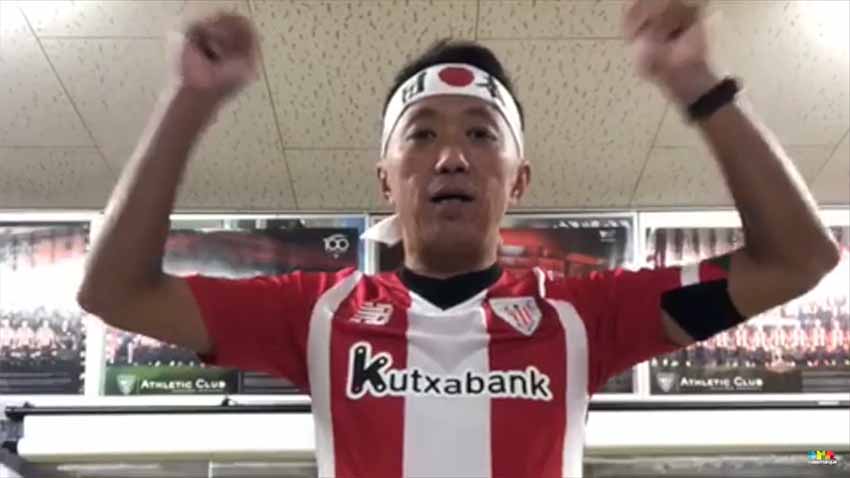 Masami Murakami cheered Susaeta on from the headquarters of the Athletic Peña Tokiotarrak, in an archive photo (photo Eldesmarque.com)

We met and spoke to Masami Murakami for the last time, last Friday at the closing of the 7th World Congress of Basque Collectivities Abroad.  But Masami is very restless and never stops.  With a defined task that builds bridges between the Basques and Japan, this enthusiastic founder of the Tokyo Athletic Peña was one of the three delegates along with Yuichi Shimanuki and Sho Hagio from the Tokyo Euskal Etxea at the World Congress.  Unai Ezenarro signs this article that appeared in Eldesmarque.com.

Unai Ezenarro / Bilbao, Bizkaia. Masami Murakami never stops. You don't know who he is?  The founder of the Tokiotarra Athletic Fan Club is involved in everything, distributing good vibes and support to the zurigorris (zuri white, gorri, red, the colours of Athletic, Bilbao's coccer team).  After leading the viral reception committee for player Markel Susaeta in the Gamba Osaka Japanese club, this weekend he was seen (in Bilbao) at the “El Fango” field to cheer the University of Bilbao Rugby team.

His presence was a true talisman, since the team from Bilbao achieved its first victory of the season after returning to the Honorary B Division.  The director of the Tokyo Euskal Etxea experienced the triumph of the UBR live, 33-24 against Avia Eibar RT in the fourth day of competition.

Enthusiastically immersed in his role, Murakami watched two matches at Rekalde before going to eat with the family of one of the players from Athletic. Without a doubt, the tireless Japanese Athletic fan is one more Bilbaino. A great example of integration in a society and in the sport of Bizkaia.

Susaeta is Adored in Japan

In just a few weeks, Osaka Gamba new player Markel Susaeta, has gained the love and adoration of the Japanese team  The former Athletic Club player entered with the right foot forward into the new team.  On September 14th, just seconds after going on the field, the Gamba made the winning goal in front of Sagan Tosu.

Last weekend, the J1 League returned to compete with a derby in Osaka between Cerezo and Gamba as main match.  Susaeta debuted as a star, although he could not avoid the 3-1 defeat against a powerful rival who now dominates the city and marches fourth in search of a place in the Asian Champions League.

Despite the defeat, the Eibartarra was sure to have a good taste in his mouth after the match.  In addition to debuting in the eleven, number 14 carried with him the affection of the Gamba Osaka that encouraged him with Ikurriñas and posters that said “Basque Hero converted into a Hero in Osaka.”

In addition, the former lion (as Athletic players are known) already has his own war cries. “Susaeta gu gara,” and Eta, eta, eta, Susaeta” the Japanese fans of the Gamba Osaka sing to their new idol, undoubtedly encouraged by the great ambassador of the red and white in the country of the rising sun, Masami Murakami, President of the Tokiotarrak Athletic Club.

Murakami is a faithful Athletic fan that watched various matches at San Mame as well as away from home.  Now rugby lovers can also see him at a Bilbao University game.