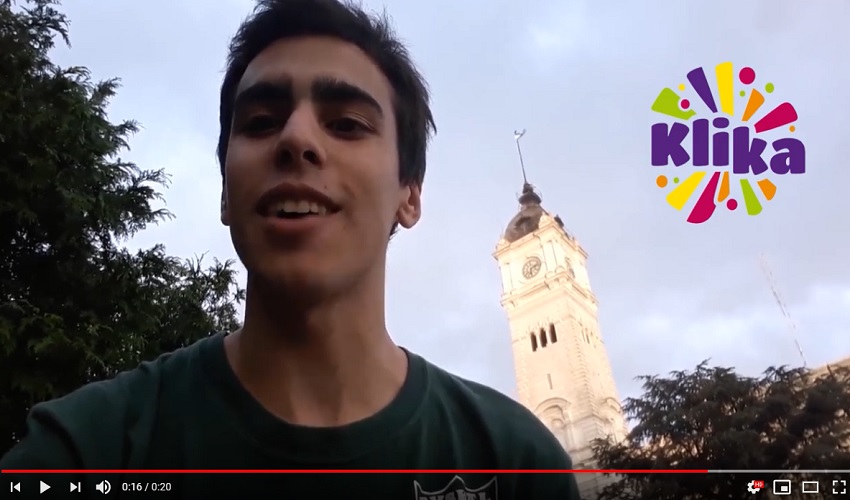 Donostia-San Sebastián. The Video Contest organized by the Etxepare Basque Institute and the AEK Cooperative, as part of Korrika 21, boasted a first prize of a stay in the Basque Country with travel and stay covered to study at a Barnetegi, now has two winners.  Among the videos submitted by Basque club students, the winner was Enzo Damelio from Argentina who had 1470 “Likes.” Among the videos submitted by students at Basque language and culture lectureships at various universities around the world, the most votes received (1122) were students at UNAM in Mexico City, and in their name, Manuel Hernandez will travel to the Basque Country.  Neither of the winners has Basque ancestors, but their enthusiasm for Basque is their best characteristic.

Enzo Damelia is 19, and he has not Basque ancestry, he is originally from Macachin, Argentina but is currently living in La Plata where he is taking intermediate Basque at the Euzko Etxea in the capital city.  In a conversation with EuskalKultura.com, Enzo expressed how happy he was to win and thanked everyone who supported him. “I am really happy, not only for the opportunity to travel to Euskal Herria, which is my dream, but also to be able to continue learning Basque, where it is spoken, that I’m sure is going to be a very enriching experience.  I am also happy for the support that I received from my loved ones and people in the Diaspora.  Thanks to them I won,” he explained.

From Mexico, Haizea Elizondo Gorroño, Basque teacher at UNAM (Autonomous University of Mexico) enthusiastically explained their organization of Korrika every two years, and that this enthusiasm is what ensured her students winning the contest.  Manuel Hernandez Hernandez will be the one student to travel to Euskal Herria. “He started three years ago as a very diligent student.  The three hours a week of class are limited, and so he expanded them on his own.  He wasn’t the only one in his group, but there is no doubt that this prize was a good incentive, and that it is well-deserved,” she told EuskalKultura.com.

Zorionak to both winners, and their fellow students and teachers, as well as to all who study Euskera in Basque clubs and lectureships around the world!