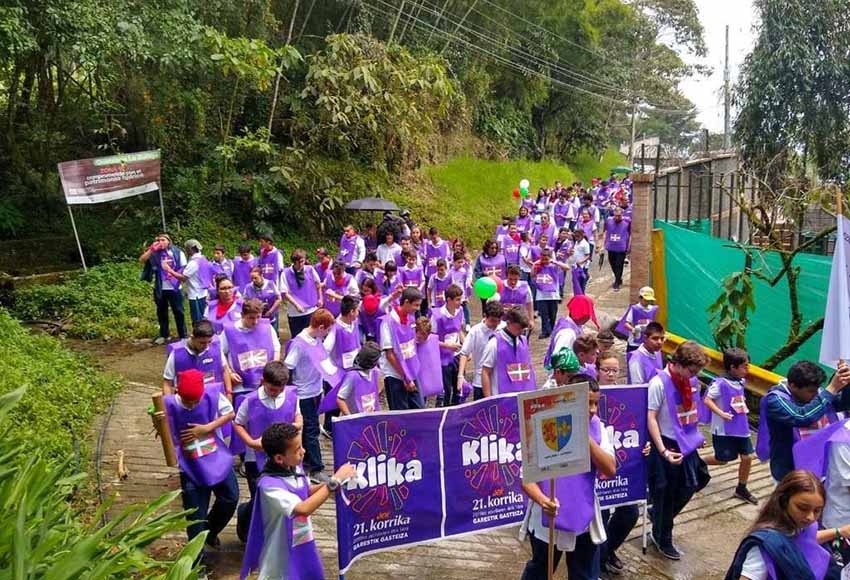 Korrika 21 in Antioquia, Colombia that took place on the area surrounding the Euskadi College in Medellin

Medellin, Colombia. All over the world, Korrikas of all types continue to join in at a distance from the official Korrika that is reaching its goal next Sunday in the Basque Country, in Vitoria-Gasteiz. Most are initiatives that start with members of Basque clubs and Etxepare Basque Institute lectureships, although there are also others that include Basque residents and euskaltzales that gather simply to organize a local chapter of the race.  In Antioquia, Colombia, the event took place yesterday thanks to the Gure Mendietakoak Basque club and the Euskadi College in Medellin.

The idea began to participate in the race to support Korrika was brought by Gure mendietakoak, with the support of the Euskadi College, proposing to the students this different experience about the Basque language and culture, with the posters and bibs that they created themselves with great imagination.  They achieved the goal and held a worthy local chapter of Korrika 21.  The effort that accompanies many more like it throughout the Diaspora.  Zorionak!