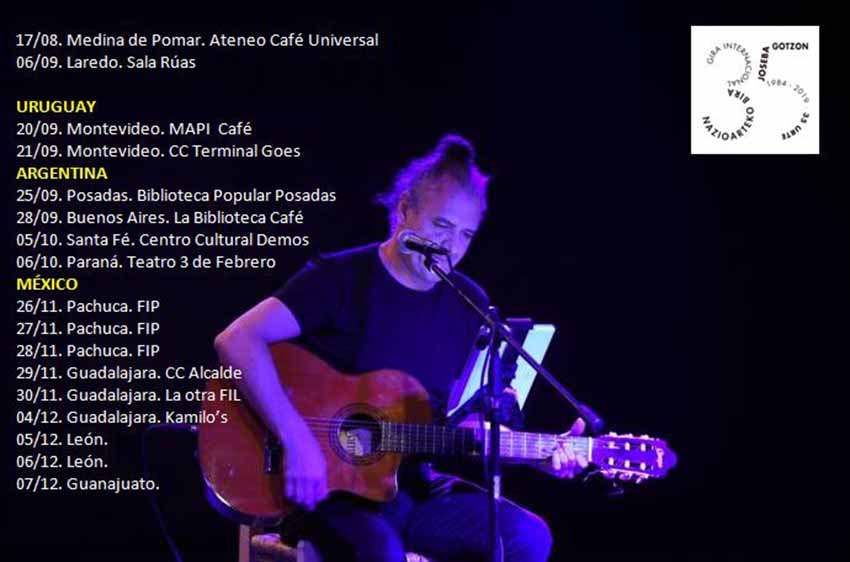 Mexico City, Mexico. The singer from Portugalete has spent the year traveling as part of his 35th anniversary celebrations as a singer.  He began in Euskal Herria and in various places in Spain, to later cross the pond to sing in Cuba, Uruguay, Chile and Argentina.  Now, to end the year, he will return this week to Mexico as part of his “35” tour with stops, beginning tomorrow in the states of Hidalgo, Jalisco and Guanajuato.

Joseba Gotzon will begin his program in Pachuca, at the 9th edition of the International Festival of Poetry “Ignacio Rodriguez Galvan,” under the order of Mexican poet Jorge Contreras Herrera.  The event will be tomorrow, Tuesday, at the Romo de Vivar Theater.  On the next day, he will perform at the Railroad Cultural Center with a concert on Thursday at the University of Hidalgo and saying farewell to this poetry festival.

He will make a second stop in Guadalajra, in the state of Jalisco.  There will have a special performance, in memory of the “Selection of Euzkadi,” that disappeared 80 years ago. As part of this performance the documentary A Team of Brothers (Anaien taldea) will be shown and he will sing songs from his “Nortasuna” album narrating the story of that brave and iconic team.

He will also perform on November 30th at the Guadalajara Literature and Independent Art Festival.  His farewell to Mexico will take place on December 5-7 in Leon de Guanajuato, confident of repeating last year’s success.