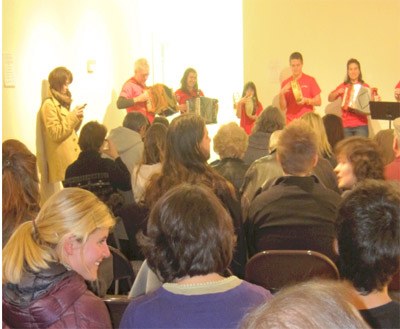 This Monday, December 3, Basques all over the world will celebrate the International Day of Euskera, the Basque language. Some events have already begun in the Diaspora as well as the Basque Country as a warm-up for the big day. In Gasteiz nearly 500 people participated in the Mintzodromo at the Artium Museum last Wednesday and in Madrid the Basque Club Euskaltegi celebrated a Bertso-afari, with bertsolaris Uxue Alberdi and Onintza Enbeita. And what’s next? The following article includes some of the dates in the Basque Country and the Diaspora.

Bilbao, Bizkaia.  This Monday the International Day of Euskera will be celebrated with various activities in the Basque Country and the Diaspora, but there are several Basque clubs who are taking advantage of this weekend to assure greater member participation in their activities. These are some of the things that are happening.

Beginning in the Basque Country, in Gasteiz the Lazarraga Prize will be awarded today that is destined for people of that city who have been especially involved in the promotion of Euskera, and in addition, there will also be various activities until December 5.  In Bilbo, there will be an official act at the Arriaga Theater on December 3 as well as other activities throughout Bizkaia (complete list if activities here.)

In Donostia, on December 3, the Provincial Government of Gipuzkoa, the University of the Basque Country and the Gaztezulo magazine have organized debates between youth to discuss how they live in Basque (more information here).  Finally, on the same day the Basque Government and the Etxepare Basque Institute will present their campaign “Surfeatu euskararen olatua mundu osoan” (Ride the Basque wave around the world); along with the Surfilm Festival.

Outside of the Basque Country there will also be numerous events.  In a prior article we let you know about activities in Argentina, and here we gather events in the rest of the Diaspora (knowing that this is not complete but contains what we have so far).

In Paraguay, the Jasone Etxea in Asuncion will celebrate a Basque dinner today at the Lawn Tenis Club (Maestro Pellegrini, 420).  The event will include special guests from Argentina: dancers Ignacio Borras and Josefina Galvan Darrichon, from Urundik in Parana, who will perform Basque dance.

In Chile, Euzko Etxea in Santiago will hold a special series of activites organized by Basque students and teachers.  In the US, the Basque Cultural Center in San Francisco (599 Railroad Avenue, South San Francisco) will show Kabalkada Toberak from Irisarri.

The video shows the Kabalkada in Irisarri, a festive cultural parade that after having been dormant for a number of years was resuscitated this summer.  The Aldudarrak Association recorded the show and moments of this special day will be shown in San Francisco. Prior to the screening there will be pintxos and a meal, where those in attendance will be able to listen to radio program 8 Herrialdeak Zuzenean, that will be airing a special broadcast on Euskararen Eguna.

In Australia, the Gure Txoko club in Sydney will celebrate the day on Sunday and according to club sources, it is already sold out.  In England the London Basque Society will gather its members at a meal at the Pinxo de Covent Garden Restaurant on Sunday.  At the other end of the world, the Centro Euskaro in Montevideo, Uruguay, will have a lunch at the Centro Orensano, followed by a dance performance by the dance group Eusko Indarra, who is celebrating its 30 anniversary.

Following, at 6:30pm, various shorts will be shown as part of the Kimuak program at the Basque club, with the collaboration of the Basque Filmoteca.  Following the events participants will enjoy dinner at the club.

In Barcelona, writer Fito Rodriguez will give a talk in the afternoon on Txillardegi, one of the most influential contemporary Basque writers, about whom he has published a book. The talk will take place at the Official Language School and will be in Basque.

In Boise, Singing for Euskera

Finally in Boise, Idaho, on Monday, Basque students and professors will gather to celebrate a joint class in order to get to know each other and to practice Basque.  Afterwards, they will have pintxos at the Leku Ona Restaurant, where they will practice songs learned in class this year.

On December 9, Txantxangorriak will give a concert followed by a children’s dance performance.  Following, the Olentzero will come to the clubhouse, to collect the children’s’ letters and to distribute gifts.  Finally, on December 16 Basque students will get together with Boise’s Bihotzetik Choir to sing Christmas Carols to the elderly.