In times of COVID, the youngest cooks take over charity cooking at the Basque club in San Nicolás 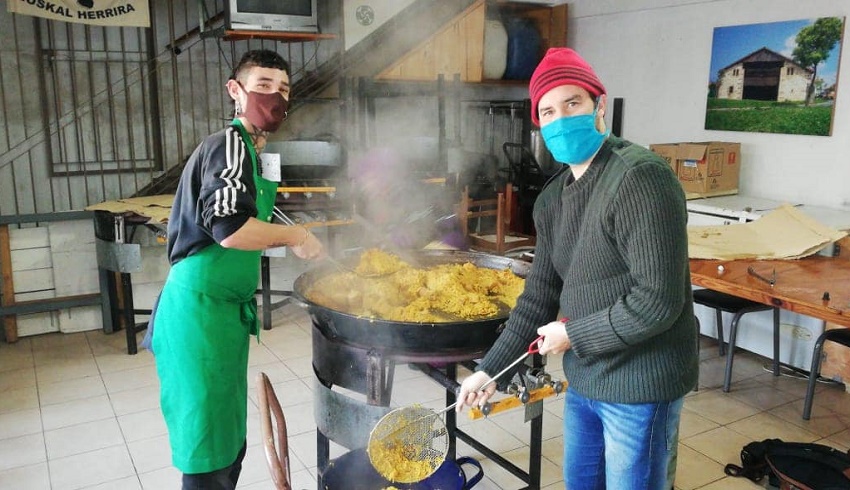 The new generation of sukaldaris at the Euskal Etxea in San Nicolas in charge of paellas, with mask and social distancing

San Nicolás, Argentina. The San Nicolas Basque Club has carried out the Etxe Nasaia Program for 20 years, a program that provides lunches at the clubhouse, once a month, to school-aged children.  The project has a double objective: collaborate with the most vulnerable sectors of the city while creating a stronger link between the community and the Euskal Etxea.

With the pandemic, the conditions of the program changed a lot.  “Since schools are close and there is much hunger in San Nicolas, we decided to contact charity dining rooms and kitchens,” Ana Maria Erausquin, club president told EuskalKultura.eus.  Every Saturday we prepare between 100 and 130 services of paella that each institution comes to pick up.”

The Euskal Etxea also had to reorganize themselves.  In fact, according to Erausquin, “Right now the sukardaris participating are the youngest, the “third generation of cooks,” that aren’t at as much risk as their elders.”

“We also had to revise our numbers, because the quantity of servings increased, but we were missing our two big revenue sources, which are usually “Buenos Aires Celebrates,” and “The Night of San Nicolas." We have still done three fundraising food activities that went very well, since the locals know us and collaborate.”

Last Saturday the long-awaited paella arrived at the “Rincón de Luz” Dining Room, in the Las Mellizas neighborhood, from where it was distributed to those who came in person as well as to others at home who could not come because they were infected by the Coronavirus. “During these months we have even cooked for the Hospital in San Nicolás, which sometimes does not have enough resources for staff; and I’m sure we will do it again,” she concluded.