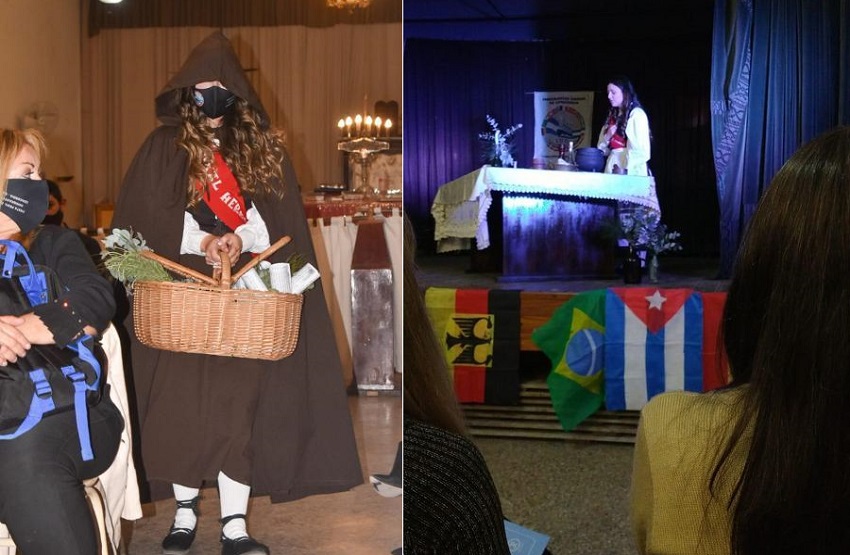 Concordia, Argentina. The events of the XXVIII Provincial Immigrant Festival in Entre Rios began in July and will run through October in the city of Concordia.  As part of the event, there were two large food fairs at the city’s Costanera, and on August 21st there was a “Talent Gala,” an event that “aims to show the attitudes and skills of the queen candidates for the Festival of Communities.”

At the Gala, the representative from the Ibaiko Izarra Basque Club, Agustina Lorenzatto, performed a theatric presentation that gave voice and body to the Basque women burned by the Inquisition, in the misnamed “witch hunts,” with the text that she also wrote.  The Basque club member, not only brought the story of these Basque women burned at the stake to the present, but also called for reflection on the current reality of gender violence.

Agustina Lorenzatto is a superior technician in Social Communication and a journalist, and currently works in various media in Concordia.  She has been part of the Ibaiko Izarra Basque Club for two years, and as a queen candidate she presented her research on the “Basque Woman.”

“Inspired by personal interest, as well as by those who asked her to participate, I added research that I did in a descriptive way on the historic role of Basque women in society.  Their importance to their villages, the economy, and including of course the mythological point of view,” the young journalist explained.  Agustina Lorenzatto is a descendant of Navarrese who arrived in Argentina at the end of the 19th century.